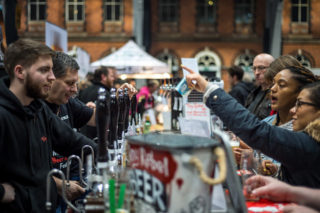 Manchester may have everything but a beach – but drinkers can anticipate sniffing sea air next January. They are invited to explore from coast to coast as tickets go on sale for the North’s biggest celebration of beer and cider.

Now in its seventh year, CAMRA’s Manchester Beer and Cider Festival features beers from the UK and further afield. For the return to Manchester Central from Thursday 23rd to Saturday 25th January 2020, organisers will be shipping in beers from across the North. There’ll be no need for maps with the huge new Coast To Coast bar showcasing ales from Merseyside to Humberside via Lancashire, Manchester and Yorkshire.

The event attract visitors from all over the world to Manchester, pouring through the doors to sample some of the very best beers and ciders from the UK’s booming brewing and cider making industries. Fans of foreign beers will be well catered for with an excellent selection promised from Europe and North America.

Two bars are poised to return. The Beers From The Wood bar proved popular with drinkers, many of whom had never seen ales served from the traditional casks. The festival introduced a a Gin bar in 2019 and the experiment went down well. For next January, the gins will be drawn exclusively from the many outstanding local distilleries.

For some visitors, the brewery bars are the highlight of their trip. Already some of the perennial favourites have confirmed, with festival award winners Tiny Rebel and Brass Castle leading the way. Rooster’s of Harrogate is set to make its first appearance and is sure to be a big draw.

Plans are in hand to enhance festival-goers’ experience with a series of tutored tastings run by acknowledged beer and cider experts. Hot and cold food will be available, and stalls selling traditional pub treats alongside modern snacks, cheeses and even Viking drinking horns. And the festival is once again pleased to be working with the North West Air Ambulance as its chosen charity partner.

Joint festival organisers Peter Alexander and Adrian Saunders have been working on the festival since the review of the 2019 event. Peter said: “We’re delighted to make Manchester Central our home once again. Each year, we examine feedback from visitors to make the next one even better. There’s a lot of coordination across different disciplines needed as the festival is almost entirely set up and run by CAMRA volunteers.

“We’re open to the public for three days, but CAMRA members get the perk of a free-to-enter preview evening. We have a single entry price each day including refundable glass hire that minimises queues inside and outside the venue.”

Adrian added: “For 2020, we’ve frozen the entry price for advance ticket holders, who also get the benefit of our doors opening early. We’d recommend visitors snapping up tickets in advance – anticipation is part of the excitement of our festival!”

Tickets for the event are on sale from 6pm on Wednesday 23rd October via the festival website, www.mancbeerfest.uk