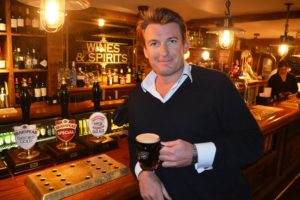 Henley brewer and pub operator Brakspear has brought back Old Ale, one of the favourite beers from the original Brakspear brewery in the town. The ale is now being brewed at the Bell Street Brewery, the microbrewery which opened in 2013.

Old Ale was last brewed in 2002, before the Brakspear brewery was closed. The decision to restore the beer was made after a number of Brakspear licensees visited the Great British Beer Festival last summer, as chief executive Tom Davies explained, “While we were there, a CAMRA member approached us to say that Brakspear Old Ale was the best beer he’d ever tasted.

“We thought if the beer was still being talked about a dozen years later, it must be worth brewing again. So we opened the archives from the old Henley brewery and found the recipe for Old Ale and our head brewer Malcolm Mayo contacted Peter Scholey, who used to be the head brewer at the original brewery to discuss some of the finer points. The first barrels of Old Ale left the Bell Street Brewery earlier this month.”

The first batch of Old Ale sold out quickly in the Bull on Bell Street – where the microbrewery is located – and a handful of other pubs in and around Henley including the Angel on the Bridge, the Dew Drop in Hurley, Perch & Pike in South Stoke and Reformation in Gallowstree Common. More is being brewed now to meet demand and Brakspear is considering whether to make it a permanent beer at the Bell Street Brewery, alongside Brakspear Special.

Brakspear Old Ale is a 4.3% ABV ale brewed with pale Maris Otter, Crystal and Black malts and Fuggles, Pilgrim and Styrian Goldings hops. It is amber brown in colour and has a rich, caramel taste.