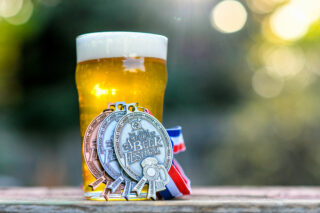 The Brewers Association (BA) awarded 272 medals* to 240 breweries across America for the 2020 Great American Beer Festival (GABF) competition, the world’s most prestigious professional beer competition.  The best beers in 91 beer categories covering 170 different beer styles (including all subcategories) were awarded gold, silver, and bronze medals during a virtual ceremony held on October 16.

Judges for the 34th edition of the pre-eminent competition evaluated 8,806 entries from 1,720 breweries from all 50 states plus Washington, D.C. Socially distanced judging took place in 35 sessions over 18 days with strict safety measures in place.

“This year’s GABF competition may have looked a little different, but the beers entered into the competition were as impressive and innovative as ever,” said Chris Swersey, competition manager, Great American Beer Festival. “This has arguably been one of the most challenging years breweries have ever faced, so we hope these awards serve as a symbol not only of brewing excellence but also the resiliency of the craft brewing community as a whole.”

Lotte Peplow, American Craft Beer Ambassador for Europe for the Brewers Association, adds: “It’s great to see many Brewers Association Export Development Programme members winning top honours as their beers may be available in export markets around the world in the future.  Beers from Boulevard Brewing Co, Denver Beer Co, Port City Brewing Co Rogue Ales, Sierra Nevada Brewing Co and many more all came away with medals.  They will be worth seeking out for their full-flavour, incredible complexity and subtle nuances of character.”

The winners of the top five most-entered categories were: