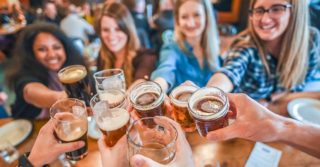 The Brewers Association, the not-for-profit trade association representing small and independent American craft brewers, announces its sponsorship of the USA/Rest of the World Bar (number 24) at this year’s Great British Beer Festival (GBBF) for the 15th consecutive year.

Through the Brewers Association’s Export Development Programme approximately 25 American craft breweries will be represented including new participants making their debut at GBBF as well as old favourites, and comprise:

Approximately 90 different American craft beers will be available for sampling in can or bottle format, most of which are normally unavailable in the UK. As well as world-class examples of classic beer styles, the selection also includes rare and unusual beers such as Doppelbock lager, gose with watermelon, strawberry hefeweizen, rosé wine inspired saison and even a Kombucha IPA! They range in style and strength from a sparkling ale with matcha green tea and crushed fruit through to Barrel-Aged Russian imperial stouts and showcase the experimentation and innovation for which American craft brewers are renowned. All beers are being air-freighted across the Atlantic to arrive as fresh as the brewer intended and in peak condition.

Bob Pease, CEO/President for the Brewers Association, comments: “The UK is the second largest export market for American craft beer after Canada and accounts for 16.6% of all exports, up from 10.6% in 2017. GBBF is an important platform for our Export Development Programme Member brewers to explore new opportunities in the UK and showcase their innovative, diverse, high quality beers to the UK beer lover. We are delighted to once again be part of the Festival and we applaud CAMRA for supporting beers from the international brewing community.”

Catherine Tonry, Festival Director for GBBF, adds: “We’re excited to announce the return of one of the most popular bars at the Great British Beer Festival on America’s Independence Day. The Brewers Association will once again be providing approximately 90 different American craft beers for the festival, showcasing exciting new flavours such as rosé ale and honey wheat ale. The distinct flavours and styles hailing in from the USA brings something extra special to the festival and is always a popular stand to visit. Make sure to get in early – this is the only place to sample these brews in the UK and once they’re gone, they’re gone!”

A Masterclass tasting of seven innovative and creative American craft beers will take place at GBBF on Tuesday 6th August, 7.30-8.30pm. It will be presented by those brewers who have travelled across from America, and the Brewers Association. For a complimentary ticket please contact lotte@peplowpr.com

Free downloadable resources to help you enjoy and understand American craft beer are available at www.brewersassociation.org or www.craftbeer.com

The Brewers Association (BA) is the not-for-profit trade association dedicated to small and independent American brewers, their beers and the community of brewing enthusiasts. The BA represents 5,000-plus U.S. breweries. The BA’s independent craft brewer seal is a widely adopted symbol that differentiates beers by small and independent craft brewers. The BA organizes events including the World Beer Cup®, Great American Beer Festival®, Craft Brewers Conference® & BrewExpo America®, SAVOR™: An American Craft Beer & Food Experience, Homebrew ConTM, National Homebrew Competition and American Craft Beer Week®. The BA publishes The New Brewer® magazine, and Brewers Publications® is the leading publisher of brewing literature in the U.S. Beer lovers are invited to learn more about the dynamic world of craft beer at CraftBeer.com® and about homebrewing via the BA’s American Homebrewers Association® and the free Brew Guru® mobile app. Follow us on Facebook, Twitter and Instagram.