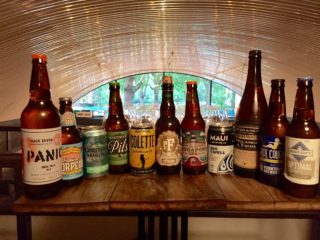 In a unique, one-off event, Brewers Association Executive Chef, Adam Dulye and Sager & Wilde Head Chef, Chris Leach, devised a five-course menu using seasonal and local ingredients expertly paired with two full-flavoured, bold and distinctive American craft beers per course to demonstrate beer’s diverse range of flavours and their affinity to food.   In a break from the norm, Dulye ended the meal on a lighter note by pairing lemon tart with a witbier and a blonde ale.   Sager & Wilde’s award-winning wine list took a back seat as selected guests, and members of the public, explored the gastronomic kinship between creative and inspirational beer and food pairings.

Adam Dulye, comments: “Within the last few years there has been a major shift in how beer is perceived with food. The so called rules that used to be in place, whether it be building a menu by weight of abv or richness of style, are no longer needed. A well written menu, a beautifully executed dish, a thought-out pairing can now take the palate back and forth from big roasty flavors to light crisp notes or from tart, funky and sour notes to big hoppy flavors. When we started pairings a few years ago it was about what beer can do with food. Now it has evolved into what beer and food can do together.

“It was important to search out a chef like Chris and a team such as Sager + Wilde’s that has built the trust of their guests and their culinary community.  In doing so more and more guests are likely to put aside any preconceived notions about beer pairings and put their trust in what Chris and his team can do on the plate. When you introduce a new idea, a new pairing it is best to have at least part of the adventure known.  Knowing that the flavors, textures and tastes on the plate are carefully crafted relaxes the diner and allows a more open minded experience into what beer and food can do together.”

The following brewers travelled from America to support the event:

Beer lovers are invited to learn more about the dynamic world of craft beer at CraftBeer.com and about homebrewing via the BA’s American Homebrewers Association and the free Brew Guru™ mobile app. Follow us on Facebook and Twitter.