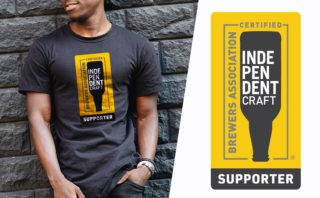 “While small and independent breweries work heavily to promote their craft, they also rely on a layered group of partners to proudly sell, serve and showcase their beer. These beer community stakeholders have asked for ways to support the independent craft brewer seal, and now they can,” said Julia Herz, craft beer program director, Brewers Association.

The independent craft brewer seal was launched by the BA on June 27, 2017, as a tool to minimize confusion in the marketplace and clearly identify beers from small and independent U.S. breweries. Today, more than 4,000 craft brewing companies have adopted the seal, representing more than 85 percent of the volume of craft beer brewed.

“Many beer lovers have their eyes—and wallets—open to seek the seal,” added Herz. “From printing it on menus or grouping independent craft beers together at retail, to prominent signage at beer festivals, now is a great time for supporters to put the seal in play and help advance the beverage of beer.”

The independent craft brewer supporter seal can be accessed at SupportIndependentBeer.com. Join the conversation: #SeekTheSeal.

Abby Cohen (on behalf of the Brewers Association)

The Brewers Association (BA) is the not-for-profit trade association dedicated to small and independent American brewers, their beers and the community of brewing enthusiasts. The BA represents more than 4,800 U.S. breweries. The BA’s independent craft brewer seal is a widely adopted symbol that differentiates beers by small and independent craft brewers. The BA organizes events including the World Beer Cup®, Great American Beer Festival®, Craft Brewers Conference® & BrewExpo America®, SAVORTM: An American Craft Beer & Food Experience, Homebrew ConTM, National Homebrew Competition and American Craft Beer Week®. The BA publishes The New Brewer® magazine, and Brewers Publications® is the leading publisher of brewing literature in the U.S. Beer lovers are invited to learn more about the dynamic world of craft beer at CraftBeer.com® and about homebrewing via the BA’s American Homebrewers Association® and the free Brew Guru® mobile app. Follow us on Facebook, Twitter and Instagram.

The Brewers Association is an equal opportunity employer and does not discriminate on the basis of race, color, national origin, gender, religion, age, disability, political beliefs, sexual orientation, or marital/familial status. The BA complies with provisions of Executive Order 11246 and the rules, regulations, and relevant orders of the Secretary of Labor.