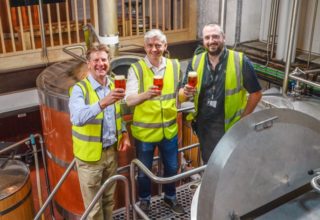 St Austell Brewery has brewed a one-off beer in support of Long Live the Local, the campaign to save the Great British pub. It celebrates the vital role pubs play in our communities, culture and the economy and highlights the jeopardy they face.

David Cunningham, the campaign’s Programme Director, visited St Austell Brewery to help brew the Cornish Red IPA, aptly named Long Live the Local. The beer will be used at events to campaign for petition signatures, calling the government to relieve pubs of rising tax pressures at the upcoming budget. The IPA’s red hue is inspired by the Chancellor’s iconic red Budget box.

St Austell Brewery will also be sending Long Live the Local activation kits – including beer mats and posters – to 176 of its own pubs and 500 of its customers, to raise further awareness of the campaign.

Three pubs close their doors every day in the UK due to a range of financial pressures. Spearheaded by Britain’s Beer Alliance, a cross-industry group of brewers and pub groups, Long Live the Local is calling for the Chancellor to acknowledge the vital social role that pubs play in communities across the South West and beyond.

David Cunningham, Programme Director, Long Live the Local said: “We’re grateful to St Austell Brewery for helping to amplify our message. Having our own great-tasting bottled beer will really help us to spread the word about our campaign and the petition to cut beer tax.

“Not only will the campaign’s success help local pubs, it’ll also benefit the wellbeing of the economy, job security and most importantly communities. The reality is that pubs are struggling to make any profit in the current climate because one in three pounds spent in pubs currently goes to the taxman. This year the government plans to increase beer duty again, applying even more pressure on local pubs.”

James Staughton, Chief Executive, St Austell Brewery said: “We encourage everyone to support the Long Live the Local campaign. The pub industry creates jobs, encourages tourism and most importantly, provides places for people to gather and socialise. As an independent, regional brewery with our own pub estate, we’re keen to ensure that local pubs remain vibrant and successful – but rising costs are putting small businesses under strain.

“Pubs have been the heart and soul of British culture for generations. It’s vital that we do all we can to work with the government to safeguard their future.”

Long Live the Local (limited-edition 500ml bottles) will be available to buy from St Austell Brewery’s Visitor Centre and www.staustellbreweryshop.co.uk while stocks last.

A gem at the heart of the Cornish community, and an employer of over 1,500 people, the company also has an estate of 176 pubs and hotels across the South West.

Long Live the Local is a campaign, backed by Britain’s Beer Alliance, that celebrates the positive role that pubs play in our lives and communities. It highlights the jeopardy that our pubs face from a range of tax pressures, including beer duty, business rates and VAT

In 2018, the Chancellor listened to the voices of 116,794 Brits, who signed the petition to cut beer duty. 48,160 of these wrote directly to their MPs directly asking them to support a cut.