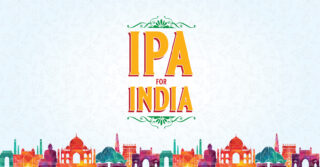 With more than 300,000 recorded deaths, and the real toll likely to be much higher, India urgently needs aid to get oxygen and medical supplies to communities that desperately need it and the UK brewing community has come together to raise funds to help.

It would take a heart of stone not to have reacted strongly to the funeral pyres on the streets of India, and the pleas to help find sick and dying relatives and hospitals with oxygen on social media, so Goffs Brewery manager Libby Elswood decided she would try and do something about it.

Bringing together 15 UK breweries, under the banner of IPA for India, they will all be brewing their own interpretation of a classic IPA on June 17 and will be sending all of the profits to SEWA UK, a 100% volunteer-run charity that is sourcing oxygen & PPE and establishing connections in the hardest hit rural areas.

The band of brewers thought long and hard about whether IPA was appropriate, given its colonial roots, but felt that it was more likely to grab drinkers attention, as IPA holds the top spot as the best-selling craft beer style in the UK, and would raise the most funds.

Commenting on the initiative, Libby says: “There wasn’t really an idea on how to do this originally, it was just a human reaction to a human crisis.

“As we are looking at easing restrictions in this country India is still being ravaged & it’s heartbreaking to see and I felt there was a real opportunity to make a difference as a brewing community.

“IPA is a natural fit in people’s minds, and this isn’t an attempt to right any wrongs of a past but simply a visceral response to a country in crisis.”

She adds: “We have not only had an astonishing response from brewers wanting to get involved, but also from suppliers – Charles Faram, Crisp Maltings, Lallemand, Morrow Packaging and Colorscan – as well.

All the breweries will be releasing the beers as and when it’s ready, so please keep an eye on their social media and the hashtag #IPAforIndia and trade mailing lists for details.