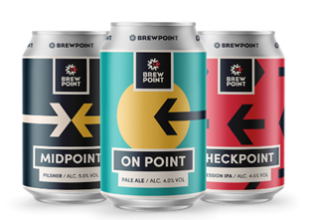 A year after brewing began at Wells & Co’s state-of-the-art home, the pub company has scored six wins at the globally recognised World Beer Awards, including the ceremony’s coveted ‘World’s Best Design’ for the Brewpoint can range.

The globally recognised awards select the very best in all the international recognised styles to award and promote the world’s best beers to consumers and trade. As well as ‘World’s Best Design’, Brewpoint also came away with five other awards across both design and taste categories:

–          Gold Award in Best Designed Can Range for Brewpoint Can Range

The award wins have been all the more special and come at an exciting time for the business as Brewpoint nears its first birthday and the winning designs being created by local talent. Carli Pfurtscheller, whilst at Bedford College, came up with the creative ideas for the permanent range of beers. This was then developed further in house by another ex Bedford college student, Marcus Finch, who created the extended seasonal range and oversaw all designs to bring the brews to life

Tom Foddy, Head of Sales and Marketing, said: “We’re extremely proud of how far Brewpoint has come in its first year, these accolades speak for the hard work that has gone into making it a success after launching in the middle of the pandemic. When we started the designs we wanted to create a brand and individual beers that were instantly recognisable to our customers and focused on the simplicity of the names and designs to make sure each had a great standout. Throughout the design process, this thinking was key and it’s brilliant to see the designs and taste of our beers receive this level of recognition at the World Beer Awards.”

All of the award-winning beers and the rest of the Brewpoint range can be found at  www.brewpoint.co.uk available for delivery across the UK.

Wells & Co. note to the editors:

Wells & Co. was founded in 1876 and is an independent, family-owned business with an estate of 190 pubs in the UK and 17 in France.   In June 2017, Wells & Co. sold its brewery on Havelock Street and most of its brands to Marston’s PLC.