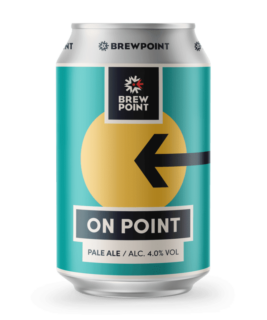 State-of-the-art Bedford based brewery, Brewpoint, has scored yet another accolade, this time at the 2021 International Brewing and Cider Awards. Wells & Co. owned Brewpoint took home the bronze award in the ‘Keg Ale (abv range 2.9% – 4.7%)’ class for its On Point Pale Ale. The easy drinking, crisp pale ale is full of character with bright tropical and citrus hop flavours making it stand out in the judging process, which this year proved to be one of the toughest, as many breweries and cider-makers entered outstanding and innovative beer and cider.

The awards are the oldest and most distinguished of their kind, with entries from around the world, often dubbed ‘the Oscars of the brewing industry’ – and with good reason. The awards are judged by fellow professional brewers and cider makers making the recognition of the winning beer or cider an outstanding accolade to receive in the industry.

Tom Foddy, Head of Sales and Marketing said: “We’re extremely proud of the number of accolades Brewpoint has achieved in its first year of brewing, these award wins speak for the hard work that has gone into making it a success after launching in the middle of the pandemic. This is the first award for On Point so to have other brewers recognise it at this level demonstrates the quality of the ale and skills of our team.”

The Brewpoint range can be found at  www.brewpoint.co.uk available for delivery across the UK.

Wells & Co. note to the editors:

Wells & Co. was founded in 1876 and is an independent, family-owned business with an estate of 190 pubs in the UK and 17 in France. In June 2017, Wells & Co. sold its brewery on Havelock Street and most of its brands to Marston’s PLC.