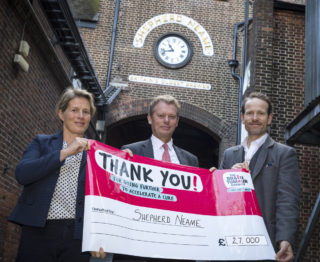 Faversham-based brewery Shepherd Neame has raised £27,000 for its first Charity of the Year, the Silas Pullen Fund.

Fundraising activities by staff at the brewery and across its pub estate during the past 12 months have included a Festive Old and New Sale, Battle of the Wits comedy night and the first Great Brewery Bake Off, along with a number of quizzes and sponsored runs. A team of plucky brewery staff including Chief Executive Jonathan Neame also took part in the Isle of Wight Ultra Challenge.

The fund was set up in the memory of Faversham schoolboy Silas Pullen, who died from an aggressive form of brain cancer in 2013, aged 11. All money is donated to The Brain Tumour Charity.

Shepherd Neame began raising money for the Silas Pullen Fund last October as part of a relaunch of its Sheps Giving charitable arm. The company’s Sheps Giving committee co-ordinates the donation of thousands of pounds worth of beer each year, along with vouchers for its pub and hotel estate, to local groups and individuals in support of their fundraising activities.

Jonathan Neame presented Silas’ parents Sarah and Ben Pullen with a cheque on Wednesday (October 1) to mark the completion of the partnership.

He said: “We are delighted to not only have been able to raise a significant amount of money for this incredibly worthy cause but also raise awareness. Our staff have really got behind this partnership and enjoyed the variety of fundraising activities and challenges organised by our Sheps Giving committee during the past year.”

Sarah Pullen said: “The Shepherd Neame community has raised a truly fantastic amount for the Silas Pullen Fund and the money that they have raised will go straight into researching vital new treatments for children with brain tumours. The company’s commitment to fund raising over the last year has been extraordinary and both Ben and I have been touched by their support and drive and would like to thank everyone involved.”

Shepherd Neame’s next Charity of the Year will be announced later this month.