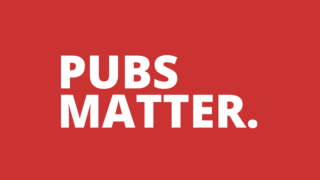 Thousands of Brits took to social media to urge Government to better support pubs this Christmas as part of the cross-industry #PubsMatter campaign.

Over 500 tweets were sent to the PM in 48 hours urging him to relax restrictions on pubs this Christmas, and thousands of emails flooded MPs inboxes describing how integral the local pub is to the festive season.

The #PubsMatter campaign was launched on Sunday by a coalition of industry partners including the British Beer and Pub Association, British Institute of Innkeeping, the Campaign for Real Ale, the Society of Independent Brewers, the Independent Family Brewers of Britain and UKHospitality to remind politicians just how important pubs are to local communities across the UK ahead of this week’s tier announcement.

Unfortunately, Christmas rules have remained unchanged and more pubs have been forcibly closed across the country this week.

A spokesperson for the campaign said: “Pubs and breweries across the UK hoping for some good news that would allow them to get some much-needed money through the tills this Christmas have been sorely disappointed.

“The announcement that most of the country will stay in Tier 2 or 3, with large parts of the East and South East joining London going into Tier 3, is another devastating blow for the beer and pubs industry when they had hoped there was light at the end of the tunnel.

“Ministers must recognise that local pubs are a force for good, bringing communities together and playing a key role in tackling loneliness and social isolation. Allowing a limited number of people to socialise safely in COVID-secure pubs in all tiers is vital not just for businesses – but also for our communities and to people’s mental wellbeing.”

Despite the announced extension to the furlough scheme yesterday, the spokesperson argues that support does not go far enough to stop the widespread closure of the nation’s pubs, which is why #PubsMatter will launch again in the new year at the first opportunity to ease restrictions on the beleaguered trade.

The spokesperson adds: “With even more pubs forced to shut for Christmas, now more than ever, we need a new, long-term, sector-specific financial support plan to make sure that otherwise-viable pubs, clubs and breweries up and down the country can survive into the new year without having to close down for good.”

To find out more and see some highlights from the campaign, visit https://whypubsmatter.org.uk/