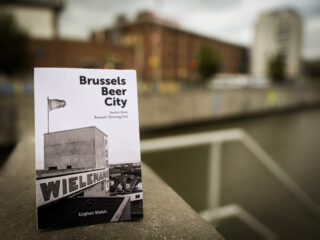 Brussels, October 6: Award-winning Brussels-based author Eoghan Walsh publishes a new history of Brussels brewing, charting the city’s historic breweries and the unique beers they made, as well as the business and political titans behind them.

Publishing October 7, Brussels Beer City: Stories from Brussels’ Brewing Past collects for the first time in English the histories of the city’s remarkable rise and tumultuous fall as one Europe’s major brewing capitals.

“Brussels is rightly lauded as a great beer city, but few even of its residents are aware of the city’s history as a home to some of the largest and most technologically advanced breweries of the 19th and early 20th centuries – breweries that shaped modern-day Brussels, be it the beers we drink, or the buildings that surround us.” Walsh says. “What’s more, Brussels is undergoing an unprecedented beer boom with growth in new breweries the likes of which hasn’t been experienced for decades, so what better time to learn about the city’s last great golden age of beer and brewing.”

Want to discover the history behind the rescue of the Wiels art centre? Patrice Lumumba’s brief stint as a sales rep for a Brussels brewery? Or how one brewer crushed his rivals in beer and football on the way to European success on and off the field? In this new collection, Eoghan Walsh – Young Beer Writer of the Year 2018 and founder of the popular Brussels Beer City website – delves into all of these and more.

To celebrate the launch of the book, and to bring to life the now-vanished beers featured in the book, Walsh has teamed up with local brewery Brussels Beer Project to brew a very special beer. Based on a 1928 recipe from an Edinburgh brewery, SCTCH 1920 is a strong Scotch Ale, an ode to a beer style that arrived to huge success in Brussels 100 years ago, and the only beer from Brussels’ brewing heyday still in production – Scotch CTS.

“We wanted people to really be able to taste the beers mentioned in the book talks about – these fantastic beers that no longer exist, or which have since evolved so much they no longer resemble what they would have tasted like a century ago,” Walsh says. “Working with Sam and Dimitri from Brussels Beer Project, we’ve stuck as closely as possible to the original ingredients and process from 1928, making something historically accurate and at the same time accessible to modern tastes. Having tasted it, I think it will surprise a lot of drinkers!”

“Part picaresque dig into the archives, part elegy for the city’s lost breweries, part celebration of Brussels’ ineffable spirit, this lucidly written and deeply researched Brussels brewing history is a delight at every turn. Walsh shares key anecdotes from centuries past, draws surprising comparisons, and makes some compelling prognostications for what’s next for the city’s brewers and beer lovers. This necessary work is a must for anyone who appreciates Belgian beer.” – Claire Bullen, Editor, Good Beer Hunting

“Fascinating, enjoyable, packed with anecdotes and stories about people and beer (and, er, football skullduggery), this gives the reader an insider’s guide to Brussels’ beer and brewing history and evokes a sense of nostalgia without being sickly or fussy. Read with a pint or two of Zinnebir to hand And then pour another.” – Adrian Tierney-Jones, Sunday Telegraph

“We often get lost in the new and shiny in beer, but this brilliant book reminds you of the incredible history Brussels and its breweries has.” – Jonny Garrett, Beer Writer of the Year

NOTES FOR THE EDITOR