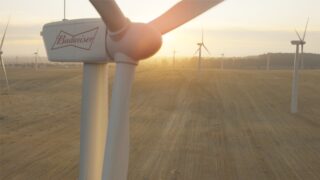 31st March 2021: Budweiser has launched a landmark new campaign revealing that every single can, bottle and keg of Budweiser in the UK has been brewed with 100% renewable electricity since January 2021 – proving the brand’s unwavering commitment to sustainability and the future of the planet.

In 2018 Budweiser Brewing Group UK&I (BBG) signed the UK’s largest privately-funded solar power deal and were the first major brewer in the UK to commit to brewing from 100% renewable sources. In January 2021 having built two solar farms and a wind turbine, BBG now generates enough renewable electricity in the UK to power the brewing operations not only of Budweiser, but its entire portfolio; including other BBG brands such as Stella Artois, Corona, Bud Light and Becks.

If all brewers were to follow Budweiser’s lead, and every one of the 8.5 billion pints drunk every year in Britain was brewed with 100% renewable electricity, this would save more than 350 million tonnes of C02 entering the earth’s atmosphere. That’s the equivalent of planting 500,000 trees. We encourage everyone to imagine a world where every beer is brewed renewably whether that is Budweiser, Heineken, Carlsberg or any other brewer.

Beautifully shot, and set to the iconic Bob Dylan track ‘Blowin’ in the wind’, Budweiser’s new campaign advert opens with a close-up of a dalmatian… it’s ears and face are flapping against the breeze as it is towed through a field of barley by Budweiser’s iconic Clydesdales. As the camera pans out it reveals an epic landscape dotted with Budweiser wind turbines with supers announcing that every Budweiser is now brewed with 100% renewable electricity for a brighter future.

The advert ran for the first time in the UK on digital from 29th March and on TV and VOD from Friday 2nd April and will run until November 2021. The campaign will reach 95% of the UK adult population 11 times across the year.

Achieving the milestone of brewing with 100% renewable electricity has  not been a breezy feat… it is the culmination of years of investment and hard work in sustainable energy infrastructure including Budweiser’s very own wind turbine at Magor brewery, South Wales, and two dedicated solar farms. Installed in December 2020, with blades of an incredible 68 metres in length, the turbine is believed to be the tallest to enter commercial operation on UK soil. The blade tips reach a height of 150 metres and sweep an area equivalent of two Wembley football pitches.  This two minute video shows some of the work that went into installing this towering wind turbine.

Alongside its wind turbine, Budweiser has signed a 15-year deal with NextEnergy Solar Fund to use electricity generated by two solar farms. At the time the deal was inked, it was the largest privately funded solar deal in British history. All of these renewable energy sources generate enough electricity to power the brewery operations of BBG’s UK production of 1.7 billion pints a year (75GWh annually). This is the equivalent of powering over 25,000 homes for a year[1] or making 750 million cups of tea[2]. This campaign is dedicated to marking the momentous occasion and making the future brighter… for everyone.

This is part of a broader, innovative, sustainability strategy which includes the removal of all plastic rings from its cans, the move to brew exclusively with barley grown on British farms, an exclusive green energy tariff for pubs and bars in partnership with Opus Energy as well as an ongoing program of carbon reduction projects in all of Budweiser Brewing Group’s 3 breweries.

Budweiser is proud that every drop of beer is now brewed renewably. This is why, every single bottle and can of Budweiser in the UK will now proudly bear a new 100% Renewable Electricity logo – the first of its kind. The logo has been made publicly available, to be used by anyone – with the aim of making a recognisable kitemark for consumers.

“In the UK we are all concerned about the climate crisis, but the scale of the problem means people often don’t know what they can do to help as individuals. Rightly, they’re looking to businesses to act. As the world’s biggest brewer we have both the ability and the duty to make a real difference. With Budweiser 100% renewable, we’re giving people the opportunity to make a small change which will contribute to solving a big problem and securing a brighter future for all of us.”

Budweiser are members of RE100. Learn more about RE100 here

We are committed to building great brands that stand the test of time and to brewing the best beers using the finest natural ingredients. We are proud to offer the UK’s leading premium beer and cider brands, including global brands Budweiser®, Corona® and Stella Artois®; international brands Bud Light®, Michelob Ultra®, Beck’s®, Leffe®, and Hoegaarden®; and local champions Bass® and Boddingtons®.

We are here to champion Britain’s iconic beer culture, from barley farmers to pubs and retail; we are a founding member of the Portman Group, member of the British Beer and Pub Association and supporter of the Drinkaware Trust. We are also members of the All-Party Parliamentary Group for Renewable and Sustainability Energy and the All-Party Parliamentary Corporate Responsibility Group. Our Dream is to bring people together for a better world. Learn more at www.budweiserbrewinggroup.co.uk or on Twitter through @BudBrewingUKI

Budweiser, The King of Beers, is a medium-bodied, flavorful, crisp American-style lager. Brewed with the best barley malt and a blend of premium hop varieties, it is an icon of core American values like optimism and celebration. In 2018, Budweiser revenue grew 5.3% globally and 10% outside of the US, behind a strong FIFA World Cup™ campaign and continued expansion into new geographies. Budweiser leveraged one of the world’s biggest platforms, the 2018 FIFA World Cup Russia™, to activate the brand in more than 50 countries. This was AB InBev’s largest and most successful campaign ever and Budweiser was the most talked about brand on digital and social channels during the tournament. Budweiser launched a renewables platform at Davos, Switzerland in January 2018 and rolled out a 100% renewable electricity symbol in the United States. Every Budweiser sold in the United States is now brewed with renewable electricity and this commitment is quickly expanding globally. In February 2019, Budweiser took this powerful message to the one of the world’s biggest stages, the Super Bowl, with a wind-power themed ad.

Press release from Weber Shandwick on behalf of Budweiser