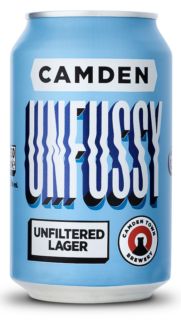 Unfussy is a lager which is unfiltered and unfussed with, tasting just as fresh as if it came straight from a tank at the brewery and never pasteurised, of course. Inspired by traditional German Kellerbiers, this beer’s brewed with Camden’s house Pilsner malt from Bamberg, torrified wheat, Callista hops and dry hopped with Spalt Select, so it’s hazy, hoppy and full bodied.

Camden Town Brewery’s core range consists of five beers including its award-winning Hells Lager, Pale Ale and Off Menu IPA. These beers are available in all major supermarkets as well as around 3,000 pubs, bars and independent retailers.

In June 2021, Camden opened its doors to a brand-new food and drink venue, the Camden Beer Hall. Teaming up fresh beer with fresh food, the Beer Hall boasts 24 taps on the bar, while the menu has been designed by British chef, Theo Randall. Fusing Italian dishes with traditional Bavarian beer hall cuisine, all dishes have been carefully designed to pair perfectly with Camden’s beer range.
________________________________

For more information, please contact the team at W: camdentownbrewery@wcommunications.co.uk