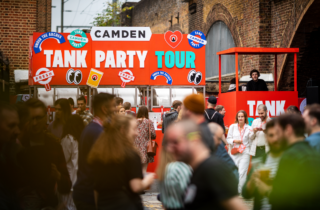 This summer, Camden Town Brewery’s Tank Party is back! Touring across the UK, the tour will be stopping at: Manchester, Leeds, Liverpool, Bristol and (new kid on the block) Newcastle before heading home to London

After our debut tour last year, we were wowed by the response lager lovers up and down the country had to our fresh tank beer. So, by popular demand, we’re bringing back our Tank Party Tour and this year, it’s bigger than ever.

This summer, we’re packing up our iconic London Tank Party and taking it on tour to not five, but SIX, cities across the UK. As well as stopping at Manchester, Leeds, Liverpool and Bristol, we’re bringing the fresh taste of Camden to our Geordie friends in Newcastle before returning to the Home of Hells in London for the grand finale.

If you haven’t already heard, our Tank Party events bring the freshest Unfiltered Hells Lager directly from our original brewery in Camden to the tastebuds of lager lovers across the UK. Poured straight from the tanks for ultimate freshness, we’ll be serving up 135HL of beer ( 23,000 pints!) throughout our national tour – we’ll cheers to that!

If you’re wondering what that means for your local city, that’s thousands of pints being poured at our Tank Party venues – you’ll need a fair few pals to help carry those back to the table… And we’re not stopping there, as we’ll also be taking over the taps to pour pints of Pale Ale and Off Menu IPA too, so there’s plenty to go around even if lager’s not your thing.

But a Camden party isn’t complete until we’ve got some tasty food and fresh entertainment to go alongside that delicious tank beer. We’ll be serving up the best street food each city has to offer, to pair perfectly with your pint(s). To give you a flavour of what our Manchester-based foodies can expect, we’ll have Carnival supplying us with the tastiest meat dishes fresh from the flame, NYC-style pizza from Voodoo Rays, zingy Mexican plates from Madre Tacos and so much more.

After you’ve explored the menu, we’ll also be offering a host of creative workshops and activities to make your Tank Party experience extra special. Be sure to bring your dancing shoes too, as we’ve recruited the best local DJs and live acts and even brass bands to bring all the good vibes (all day long).

Holly Gibson, Head of Brand Activations & Experiences at Camden Town Brewery, said: “After taking Tank Party across the country for the very first time last year, we were overwhelmed by the response and can’t wait to get back on the road for the 2022 Tank Party Tour. Working for a brewery, we get the awesome experience of drinking straight from the brewery tanks, the freshest beer you’ll ever try. That’s one of the reasons we started Tank Party 10 years ago, inviting Camden fans to share this experience with us by enjoying the freshest Unfiltered Hells direct from the tanks.“

Please find a full schedule of the Tank Party Tour below:

The Manchester, Leeds, Liverpool, Bristol and Newcastle events are completely free to attend (it’s not too good to be true, we promise) so pop down and pay us a visit – but be sure to register your interest via the Camden website at: https://www.camdentownbrewery.com/news-and-events/news/tank-party-tour-2022

Our London Tank Party will be a ticketed event, so keep your eyes peeled for more details on how we’ll be rounding off the freshest street party going in ultimate Camden style.

Camden Town Brewery is a leading brewery based in North London and the home of Hells Lager. Founded by Jasper Cuppaidge, the team began brewing under the railway arches in Camden in 2010 and opened a second brewery in Enfield in July 2017.

Camden Town Brewery’s core range consists of five beers including its award-winning Hells Lager. These beers are available in all major supermarkets as well as around 3,000 pubs, bars and independent retailers.

Alongside the core range, Camden Town Brewery releases small batch beers under its ‘Arch 55’ series. The brewery also produces fresh Beer Hall beers, which are new idea beers brewed under the arches at Camden’s new Beer Hall in Kentish Town. The fresh new beers are launched every month and give Camden’s brewing team the chance to try out new ideas, ingredients, techniques and recipes.

For more information, please contact the team at W: camdentownbrewery@wcommunications.co.uk