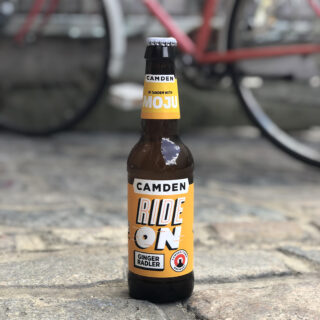 Camden Town Brewery has revealed its latest collaboration beer, teaming up with pressed juice partner MOJU to create Ride On Ginger Radler, the brewery’s first ever Radler. Ride On is Camden Hells Lager blended with MOJU’s zesty fresh ginger and lemon juice, creating a refreshing, low ABV radler. If Hells went on a ginger joy ride – it would taste like this!

MOJU share Camden’s philosophy that if you want to create a fresh tasting product that’s full of flavour, you can’t use heat pasteurisation. That’s why all Camden beers are never pasteurised for a fresher taste, and it’s why MOJU juice is cold-pressed and full of big, natural flavours – it’s a match made in unpasteurised heaven.

The low-cal and low-ABV radler is brewed using Perle and Hallertauer Tradition hops, and packed with MOJU’s all-natural punch to create a citrusy and refreshing flavour.

The word Radler is German for cyclist, linking perfectly with the Bavarian inspiration behind Camden Hells Lager. So, to create this lighter German-style beer, the brewery teamed up with MOJU to get the wheels in motion. Ride On Radler is the perfect reward for every kind of finish line – whether you’re cycling or running this summer.

So, to celebrate our first cycling inspired Radler, we’d like to offer a bottle on us to anyone who cycles to the Camden Pop Up Garden. To claim your beer just turn up by bike this weekend (31st July – 2nd August) or the following weekend (7th August – 9th August).

Jasper Cuppaidge, Founder of Camden Town Brewery said: “As soon as we teamed up with MOJU, we knew it was a match made in drinks heaven. It’s exciting to be working with a brand that, like ours, never pasteurises their drinks, giving it that fresh taste.

This is our second low-ABV beer at Camden and we’ve made sure it packs a punch – it’s the ultimate beer to enjoy out in the sunshine this summer.”

Rich Goldsmith, Co-Founder of MOJU said: “The partnership with Camden was as natural as it gets. We’re both homegrown brands, with the same principles, especially when it comes to our products. Never compromising on flavour or quality and always maintaining the integrity of our liquids by not heat pasteurising.

MOJU have always been big fans of low ABV beers. We believe in balance, so it’s not unusual for a cold beer to feature in our recovery routine after a long run or cycle ride. Both brands got really excited about the concept of a low ABV beer that was not only refreshing (and not sickly sweet!), but also had the added functionality and punch of MOJU’s fresh ginger and lemon juice, that did away with any sweeteners and preservatives commonly found in other radler-style brews. So that’s exactly what we have created and we couldn’t be more pumped. Ride on.”

In May, Camden rebranded its Camden Hells to Camden Heroes Lager in support of the NHS workers across the UK. All proceeds of the beer sales were donated to NHS charities, and NHS workers were able to claim a 6-pack on Camden.

Camden Town Brewery continued support for Hospitality Action’s COVID-19 Emergency Fund by hosting an auction on Twitter for the most valuable pint of Camden Hells delivered to two metres from one lucky beer fan’s front door. The pint was sold for £800, with Camden matching the winning bid.