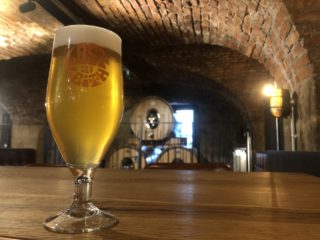 The ‘Lost in Leith’ bar and Fermentaria, which will open its doors on the 7th of March 2020, will become the home of the Leith-based brewery’s barrel-aging project.

A new addition to the buzzing Edinburgh craft beer scene

Located in Commercial Quay, close to some of the Leith foodies’ favourite spots like The Kitchin or Quay Common, ‘Lost in Leith’ bar and fermentaria will showcase some of Campervan’s classics alongside a full array of weird and wonderful beers from all over the world.

With an emphasis on Scottish produce, local suppliers and sustainability, we locally sourced many of the spirits and the wine list has a big emphasis on producers who follow low intervention practices.

Set in an old whisky bond, the bar is the only one on Commercial Quay that still has the original vaulted ceilings reminding of an old French vineyard cellar, which make it the perfect venue for Campervan’s barrel aged beers.

Like the taproom, the new bar will be community focused, fully inclusive, and dog friendly. They’ve also amended the license to be open to families with young children.  Their whole aim is to be welcome to all.

With 18 taps and a selection of bottles and cans, including the latest release of Campervan’s barrel aged range, the bar aims to become the new hot spot of the Edinburgh and Scottish Craft Beer Scene.

“Our home and community is in Leith, so it’s the only place we considered when we started thinking about opening a bar.  Commercial Quay jumped out as a creative hub with loads of outside space and the potential for an amazing beer garden. Over the course of the next few months we plan to introduce our fermented foods which we’ll pair up with local produce and showcase these with our beer and wine pairings”

But the main distinction of  ‘Lost In Leith’ bar and fermentaria consists of the fact that it’s the first craft beer pub that will include an on-site beer barrel aging process, with the installation of 3 x 10hl oak Foeders manufactured by Allary Tonnellerie near Cognac in France.

“We believe we are the first bar in the UK to have a dedicated area to show people how we age beer in oak barrels.  We sourced our oak Foeders from France due it its mellow oak profile, which we felt would add amazing flavours to our beers.  We chose Allary Tonnellerie as they are a family business and understand values of low intervention and producing products which are kinder to the environment.

The French cooper is well known for their savoir-faire, sourcing oak in the most prestigious French forest and possessing generations of experiences, allowing their master coopers to develop the rigorous skills in order to achieve the quality craftsmanship that embodies the Allary name.

The 3 main barrels will be soon joined by others, in which the brewery will age their new ‘Lost In Leith’ range.

“We plan to mature our beer in the Foeders as it’s a traditional method of brewing which is very environmentally friendly with minimal intervention. Many of these beers will sit in there for over a year, developing a depth of flavour from carefully grown microbes and wild yeasts.  So we’re super excited to share this experience with people as and when the beers are at their best”

The Brewery plan to release their first beers aged on-site during a further event that will take place at the fermentaria for spring.

Lost In Leith is a card-only bar; we are dogs and kids friendly.

Started as a way to find some respite while he was looking after his family afflicted by illness, Paul Gibson began to professionally brew beer in 2015 in his garage or in his VW Campervan converted in a mobile brewery, “The Hoppy Camper”.

After a couple of promising first years, Paul decided to open The Campervan Brewery in Leith in January 2017.

The brewery hasn’t stopped growing since, with the opening of a taproom in August 2017 and the increase of their brewing capacity from 50HL to 120HL in 2019.