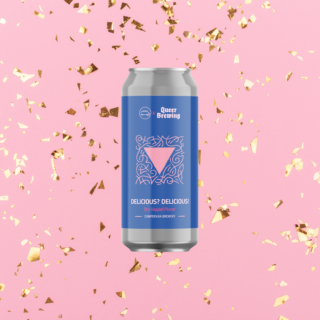 The Leith based brewery will be launching its 1st collaborative beer with The Queer Brewing Project on Wednesday 3rd March. The beer is a 5.5 % ABV dry-hopped pilsner and a portion of the proceeds will be donated to their charity partner LGBT Youth Scotland.

The 1st beer brewed in collaboration with another brewery for Campervan

This beer is the 1st collaborative beer for the Scottish Brewery, and is kicking off a series of collaborations that will take part throughout 2021, with different breweries across the UK.

Paul Gibson, founder of The Campervan Brewery to say:

“We’ve been waiting for some time to find the right brewery or the right project to team up with, so we were over the moon to kick off our collab series with the opportunity to work with Lily and The Queer Brewing Project.

Supporting values of diversity and inclusivity is part of our DNA here at Campervan, so it made total sense for us and we’re very proud of the beer”.

The Queer Brewing Project was founded in early 2019 to provide visibility for LGBTQ+ people in and around beer, and to build community, advocate for LGBTQ+ rights, and raise money for vital LGBTQ+ charities. After recognising a significant lack of LGBTQ+ community in the beer world, founder Lily Waite set out to change that, by working with first UK-based, and then international breweries to take up space in an industry dominated by cisgender, heterosexual, male voices.

“Our aim is to use beer as a platform and as a vehicle for social change, pushing for more representation, visibility, and community for LGBTQ+ people—both in the beer world and beyond.

Queer Brewing is built around the values of collaboration, education, fundraising, and taking up space for LGBTQ+ people within the industry, centred on the mechanism of brewing delicious beers with a range of breweries around the world.”

Part of the proceeds will be donated to LGBT Youth Scotland, Scotland’s national charity for LGBTI young people, working with 13–25 year olds across the country. Their goal is to make Scotland the best place to grow up for lesbian, gay, bisexual, transgender and intersex young people. More info ion their website www.lgbtyouth.org.uk.

This 5.5% ABV Dry Hopped Pilsner was brewed with Ella and Galaxy hops to layer apricot, peach, and passion fruit flavours over a gorgeous classic Pils.

The beer was brewed at the end of January at the heart of Leith, in Campervan Brewery premises. Due to the COVID 19 outbreak and current lockdown restrictions, Lily wasn’t able to travel up to Scotland for the brew day but both teams used their imagination to make it as collaborative and fun as it would have been in “normal” times.

The beer will be launched on Wednesday the 3rd of March at 7pm, during an Instagram Live event with Queer Brewing Founder Lily Waite and The Campervan Brewery team.

Delicious? Delicious! can be pre-order for the event on Campervan Brewery web shop https://www.campervanbrewery.com/shop

The beer will also be available in a selection of bottle shops.

Started as a way to find some respite while he was looking after his family afflicted by illness, Paul Gibson began to professionally brew beer in 2015 in his garage or in his VW Campervan converted in a mobile brewery, “The Hoppy Camper”.

After struggling to keep up with demand, Paul decided to open The Campervan Brewery in Leith in January 2017. The brewery hasn’t stopped growing since, with the opening of a taproom in August 2017 and the increase of their brewing capacity from 50HL to 120HL in 2019.Website:

About The Queer Brewing Project
Queer Brewing is a 100% queer owned, brewery, lead by artist and award-winning beer writer Lily Waite. Founded in early 2019 and inspired by the likes of Demark’s Hops Not Hate and People Like Us as well as London’s Craft Beer Cares festival, Queer Brewing has had a busy couple of years collaborating on over 30 beers with breweries in Denmark, Germany, Norway, and the USA, as well as plenty at home in the UK, and raising a projected £25,000 so far, for a whole host of incredible charities in the process.

Lily has been dubbed an “ LGBTQ icon ”, and has won a number of awards including Imbibe Magazine’s ‘Trailblazer of the year 2020’ and British Guild of Beer Writers’ Beer Writer Of The Year 2020. This year she was named one of the “most important voices in craft beer” by Hop Culture and topped Pellicle Magazine’s list of Trendsetters and Trailblazers for 2021.