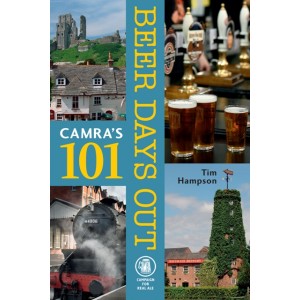 Britain is enjoying a golden age for brewing, with over 850 breweries now operational across the country producing over 5,500 different beers. To celebrate this remarkable industry, CAMRA, the Campaign for Real Ale has released a new book, ‘101 Beer Days Out’ to showcase how Britain has beer and brewing experiences to rival any in the world.

CAMRA’s 101 Beer Days Out, by award-winning author Tim Hampson (Chairman of the British Guild of Beer Writers), brings together the most exciting ways to take in the nation’s rich beer and brewing culture, whether through conventional city pub trails and tourist brewery tours, or via more unusual – and eccentrically British – events such as bog snorkelling or the World Marble Championships!

Listing attractions, events, and venues that are must visit examples of Britain’s brewing heritage and modern beer scene, the book is bursting with entries from the Orkney Isles to the south coast of Cornwall.

With an estimated 30 million visitors to the UK in 2012, CAMRA hopes tourists will take the opportunity to experience Britain’s national drink. Tim Hampson, 101 Beer Days Out author, said:

‘Beer travel is a new form of tourism. Think about when you visit a town or region that you’ve not been to before, and the first thing most of us do is seek out the best pub for a drink or something to eat.

‘101 Beer Days Out is much more than a book about pubs and breweries and their beers. It is a travel book, which can help you explore the length and breadth of Britain. It is a history book through which the reader can explore local traditions and heritage. It is a book which weaves all these elements together to tell the story of beer from the grain to the glass and its place in British culture.’

Breaking down the listings in 11 regional sections, readers of 101 Beer Days Out are supplied with a full event calendar to plan their year in beer. A few of Hampson’s favourite days out from the book, from around the country, include-

South East
The Faversham Hop Festival (September)  – a Kentish tradition. It’s a raucous celebration of the hop harvest, which spills out over the town’s street and pubs. The whole town seemingly plays host to this two day celebration. It’s a vibrant gala in honour of beer and its natural roots.

London
Find time for a pint in Greenwich. Travel down the Thames on a modern day clipper and visit the thoroughly modern Old Brewery in the Discover Greenwich’s visitor centre which has been brought back to life after 140 years by the Meantime Brewing Company. Who says beer cannot be both modern and stylish?

South West
Devizes – visit one of the country’s greatest champions of real ale and experience a pub which hits the target. The Wadworth brewery boasts great traditional ale and a modern visitor centre  The town of Devizes is also home to a pub which hosts one of Wiltshire’s best kept secrets- a rifle range.

East of England
Wells-next-the-Sea and a real ale shop. Visit one of the best real ale shops in the country and learn about the journey barley grains make from the ground to the glass, before drinking a beer in a boat which once helped rescue Jews from Nazi-occupied Denmark.

East Midlands
Lincolnshire’s theatre of beers – Batemans Brewery. Find out why a Union flag proudly flies above the brewery and should be on every beer lover’s wish list of places to go to. Their beers are so good you have to have an encore.

West Midlands
Ales from the towpath – hire a canal boat. Taking a canal boat from Sawley Marina to Burton on Trent is a journey right into the heart of England’s brewing heritage and how the industrial revolution shaped the British countryside.

Wales
Bog snorkelling on mid Wales – Over the course of a year there is a veritable Olympics of alternative sports and beer festivals in the town of Llanwrtyd Wells. Extreme sports include mountain bike bog snorkelling and a man versus horse marathon.

Yorkshire & The Humber
Let the train take the strain in a ride across the Pennines. Among rail-alers the Transpennine Real Ale train has almost legendary status. The route traverses the two rose counties of Yorkshire and Lancashire. The tracks are an iron road linking Leeds and Manchester which offers plenty of liquid refreshment.

North West
The Isle of Man TT, with track side refreshments (May) – The heart stopping adrenalin-wringing circuit has been completed faster than most people can drink a pint. But it’s the 3 breweries and great pubs offering a view of the TT as it passes which are the real attractions for some.

North East
Journey back in time at the Beamish Open Air Museum, and enjoy a pint in the faithfully restored Tiger Inn. It is a delight to be served by someone in period costume. Back in the real world, the village of Beamish has some fine pubs, including the 300 year old Black Horse.

Scotland
A Stuart brewery conjures up a modern classic. Visit Traquair House, Scotland’s oldest inhabited house. See the front gates which shut in 1745 after Bonnie Prince Charlie visited the house and will remain shut until a Stuart returns to the throne! Experience an historic beer from the tiny on-site brewery which first made beer in the early 18th century and still uses much of the original brewing equipment today.

Notes to Editors-
·         Tim Hampson is the Chair of the British Guild of Beer Writers, a frequent contributor to What’s Brewing and author of numerous books on beer and pubs including London’s Best Pubs (New Holland), and The Beer Book (DK).
·         For an online breakdown of Tim Hampson’s top picks – from each region – included in the book, please visit www.camra.org.uk/101bdopress
·         For images of the book, a review copy, or for further information on CAMRA’s 101 Beer Days Out, please contact Jon Howard in the CAMRA press office at jon.howard@camra.org.uk or 01727 798443