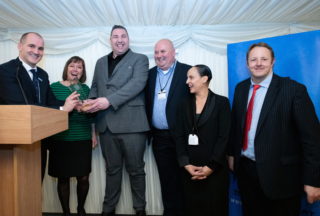 The Four Elms, Cardiff, scooped the inaugural Parliamentary Pub of the Year award at a ceremony in the House of Commons last night (15th Jan). The pub was picked from fourteen regional winners and was highlighted as an exceptional community pub that represents the important role pubs play within their locality.
The competition was launched in the summer of 2018 by Chairman of the All Party Parliamentary Pub Group, Toby Perkins, MP and attracted over 100 entries as MPs across the country took to social media encouraging constituents to vote for their favourite local.

Fourteen finalists gathered in the Terrace Pavilion with media and industry leaders as one of the most important parliamentary votes took place in the nearby chamber. Fresh from the Brexit vote MPs gathered to make an equally meaningful live vote to decide the Parliamentary Pub of the Year. Tension built during the broadcast of each of the finalists videos and votes flooded in revealing the winner by a strong lead.

“It was a tremendous pleasure to be involved in the judging process of the inaugural Parliamentary Pub of the Year Competition. From family friendly pubs and sports pubs that sponsor their local teams, to pubs who do great fundraising work and charitable work such as Meet Up Mondays; all the entries showcased how pubs are at the heart of their community. The quality of the beer and food on offer at all the pubs who entered was also second to none. Although the standard of the competition was so high, The Four Elms produced a fantastic entry and thoroughly deserved to be crowned the Parliamentary Pub of the Year.”

Manager of the Four Elms, Gareth Morgan said, “It is such an honour to receive this national award, and to have it presented to us on such a historic day in the House of Commons.”

Nominated by Labour MP Jo Stevens, Jo said, “I am really proud that the Four Elms have received this top accolade. They represent everything that is best about Cardiff Central.  They have a brilliant team in place with a host of loyal customers and are as equally welcoming to new visitors to the pub. It was a pleasure to be part of the competition and I would like to thank my constituents for nominating the many great pubs we have in the area.”

Chairman of the All Party Parliamentary Pub Group, Toby Perkins, MP,  who launched the competition said: “Tonight was a momentous night for Parliament and a memorable night for all our finalists.  The quality of the entries was outstanding and we have a very worth winner in the Four Elms – a business that had the edge in a strong field.  The friendly staff, great food and a wide range of beers on offer, coupled with the support given to local sports teams sets this pub apart.”