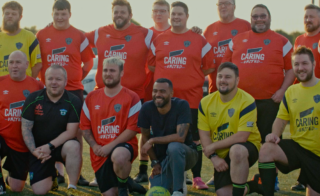 Carling and the mental health charity the Campaign Against Living Miserably (CALM) are launching a new campaign as part of their long-term partnership – More Than a Game. More Than a Game champions the positive role grassroots football can play in helping people to tackle everyday struggles. The campaign aims to recruit 20 clubs across the UK that embrace an open approach to mental health and wellbeing to become CARING UNITED clubs, providing accredited Mental Health First Aid Training to players, captains and managers. Former England star Ashley Cole is a More Than a Game ambassador and kicks off the campaign by sharing the stories of the first five CARING UNITED clubs to be recruited in a series of films.

Commenting on the campaign Ashley said: “More Than a Game has been such a brilliant project to be part of. I’ve been up and down the country meeting some inspirational people who are doing amazing things in their community. It’s been so good speaking to them, understanding their stories and seeing the amazing way they’re using football to help themselves, empower others and build better mental wellbeing in their clubs. Football has been a massive part of my life and seeing these people using their passion to make a real, life-changing difference makes me feel proud and I hope the legacy it creates with more grassroots teams signing up will really make a difference.”

The first film features the Denny Warriors – a club set up to help heavier players get fitter together and be a place where players can speak openly about their struggles. Gary Thorn, founder of Denny Warriors explains why he wanted the team to become a CARING UNITED club: “Our club was formed to help heavier men get back into football, or come new to the game, and has grown to play a part in the lives of all of us and our local community. Coming together and playing football is more than a game for us, it’s about encouraging people to talk about how they’re feeling with their teammates and others around them. It’s a privilege to be part of Caring United and we urge other clubs to do the same.”

Polling data commissioned by CALM reveals many are struggling with their mental health in a post-pandemic world. The recent survey gathered responses from more than 2000 adults across the UK revealed over half (51%) of people claim to know someone struggling with their mental wellbeing, with more than a quarter (27%) saying they are unlikely to talk about it. By sharing the CARING UNITED stories, the More Than a Game campaign aims to encourage people to open up in a safe environment, highlight the positive role local grassroots football clubs play in their communities and raise awareness of the services CALM provides.

Simon Gunning, CEO, Campaign Against Living Miserably (CALM) says; “Our partnership with Carling keeps going from strength to strength and their scale and reach is helping us to reach so many more people across the UK. Football has always been a massive part of CALM and its approach to reaching men by normalising conversations and breaking down the stigma around conversations about mental health and suicide. And More Than A Game does an incredible job in showing how inspirational people in their community can be and the way they can positively affect people’s lives. We know grassroots football is so important in helping people get together, do what they love and feel better for it. And seeing these stories really makes it clear that football really is more than a game. Creating more Caring United teams – and having people Mental Health First Aid Trained within these clubs – helps make sure there’s always someone on your side.”

The More Than a Game campaign builds on the Team Talks activity Carling and CALM ran together over lockdown, which reminded people who would have usually come together over football to still connect and talk. While the football was off our screens and our pitches, the Team Talks campaign enlisted the help of top-level managers and football legends like Stuart Pearce, Terry Butcher and Chris Hughton to encourage people to check in with friends and teammates and help to normalise conversations about mental health.

Lee Willett, Carling Brand Director says; “Carling has been synonymous with football for decades, and we truly believe that football has the power to bring people together. Hearing the stories from our first five CARING UNITED teams just really brings that home. These clubs, their players, their leaders are at the heart of their local communities and making a real difference in peoples lives. By working with these grassroots teams, we can help CALM reach directly into local communities and deliver support and advice where it can have the most impact. Being a part of this campaign and having the ability to support CALM in this way is a real privilege and something we are incredibly passionate about.”

To find out more about CALM and the support it provides please visit https://www.thecalmzone.net/. You can watch the first CARING UNITED film featuring the Denny Warriors on JOE’s social channels from 3pm.

Carling is part of a diverse portfolio of beers brands owned by Molson Coors Beverage Company, one of the world’s largest brewers. Other signature brands include Coors, Cobra and Doom Bar.