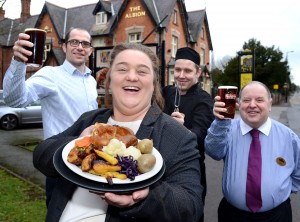 The Albion on Shobnall Road in Burton Upon Trent has re-opened following a mini-facelift and the return of its once-famous carvery.

The iconic 19th century coaching inn adjacent to the Burton brewery is often regarded as the ‘brewery tap’ and it now boasts a state-of-the-art carvery server that will operate, still under the pub’s ‘2for1’ food offer on Saturdays and Sundays only. During week days the carvery surface is cleared, the infra-red lamps pull up to the ceiling and the area then operates as a casual dining area with a table for large parties of 12 or more.

Tracey said: “I started with Marston’s when I was 17 years old as a member of bar staff and came to The Albion when I was doing my cellar training courses. Back then it was always known for its fantastic carvery which attracted customers from all over town. I’m pleased to see its return and I know that it will be a popular part of our menu again.

“I love the new design which gives us the flexibility of a carvery at weekends when it is most popular and then more dining space during the week when we have different things going on.”