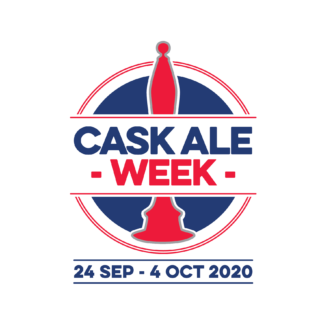 If ever cask ale had a significant role to play in the pub industry, it is now. While other drinks can be bought online or at supermarkets, cask ale matures in the pub cellar and is sold fresh, natural and bursting with flavour, across the bar.

In short, to drink cask ale, you need to visit the pub. And that is exactly what Cask Ale Week is all about. Encouraging people to go to the pub – in whatever way is safe and the regulations allow – and try some of the extraordinary cask beers on offer.

“Breweries, pubs and pub groups have responded brilliantly to Cask Ale Week this year,” says Paul Nunny of Cask Marque. “Considering the circumstances, they’ve managed to pull some fantastic activity together. And it’s still not too late for pubs or breweries to get involved.”

There is already a lot planned in different parts of the country for the Week, which runs from Thursday 24th September to Sunday 4th October. This ranges from special offers and new beers to competitions and beer quizzes.

Nunny urges pubs to, at the very minimum, use the Week to educate their staff about their unique selling point – cask ale. “All members of the team should know how it’s different from other beers; how it should look, smell and taste; how they should serve it; and how they should talk about it. Beyond that, there’s loads that publicans can do to get customers excited about cask ale, and to get the word out that their venue is participating in the Week.”

Nunny says that the new strapline, Fresh Pub Beer, has been widely welcomed and that it can be used well beyond Cask Ale Week itself.  “For too long there have been too many messages about cask ale, not all of which resonate with pub-goers. These three simple words get the message across clearly and powerfully, the more they are used, the greater the impact will be.”

Several brewers have new brews for the Week, but in any case, you don’t have to travel far to find something different to sip and savour. Publicans and bar staff can play a key role in encouraging people to be adventurous with their beer in the same way as they are with food.  As Nunny says, “The range of cask beers on offer, in terms of colour, strength, style, flavour and aroma means there’s something for everyone – even those who didn’t know they liked beer.”

Fresh Pub Beer: is there anything better?

A list of highlighted pub and brewery activities are on the following sheets. You can also find a full list of activity via the Cask Ale Week website: https://caskaleweek.co.uk/activities-2020/

A selection of activities happening during Cask Ale Week 2020

THE ADELPHI, Leeds will have a host of cask ales to try during the Week.

ADNAMS are running a host of activity throughout the Week. Including:

ARKELL’S BREWERY will be offering cask ale at £2.95 a pint to all customers in their 12 managed houses.

BEER FROM THE WOOD will be fully supporting Cask Ale Week in Northern Ireland again this year.

BLACK SHEEP BREWERY are launching a new, premium tankard for Black Sheep Best Bitter to celebrate Cask Ale Week. As part of their #BestInCask campaign, Black Sheep are encouraging people to go their local for a pint of fresh cask – with the tankards aiming to enhance the cask ale experience.

THE BOWGIE INN, Cornwall will be offering a number of real ales from Cornish breweries at a 25% off discounted price making them £3.60 per pint instead of £4.80. They are then donating £1.20 of every pint sold to their chosen charity – Cornwall Hospice Care.

CALDMORE TAVERNS are running a loyalty card scheme at 6 of their Staffordshire pubs for Cask Ale Week: buy 7 pints and get your 8th free.

THE CLAREMONT PUB, (Fairfield, Bath) will be serving a special surprise guest ale as well as their usual range, including Claremont Ale and Bitter.

They are also running a special offer of ‘buy 6 pints and get the 7th FREE’.

CRISP MALT will focus on Cask Ale Week as part of their Webinar series on Thursday, 24th September.

CULLERCOATS BREWERY will have NE30 IPA in cask for the first time during Cask Ale Week.

DAWKINS ALES will have ‘Easton Promise’ – a unique wet/green hop beer – out on sale for Cask Ale Week 2020.

EI GROUP – Some of EI Group’s pubs will be hosting Cask Ale Week Kahoot quizzes throughout the Week. Visit https://caskaleweek.co.uk/pub-quiz/ for more information.

EMBER INNS are running a special deal in around 150 of their pubs. Pints of cask ale will be priced at either £2.79, £2.89 or £2.99, depending on the venue, throughout the whole of Cask Ale Week

FIVE POINTS BREWERY are going to showcase some of their best cask beer pubs across London by hosting a series on social media talking to landlords about why cask is important, what it means to them and why it should be celebrated now more than ever.

FOOD HARDY ALES are brewing a new version of their Plum Porter in conjunction with Cask Ale Week and Stockport Beer Week.

FULLERS will be celebrating Cask Ale Week by having their 2020 Vintage Ale pouring in select Fuller’s pubs.

They are also giving away limited edition London Pride glasses and are running a mini-keg giveaway via their social media channels.

THE GARDEN HOUSE in Norwich are running a Loyalty Card during Cask Ale Week: buy 7 pints and get one free.

GRAIN BREWERY are hosting a ThreeOneSix social competition throughout Cask Ale Week. You could become a brewer for a day! Look out for it on their social channels.

GREENE KING will be hosting a tasting session on Facebook between Ross O’Hara (Head Brewer) and Alex Broome (Senior Brewer). Ross and Alex will be giving insights and opinions on favourite cask beers.

HOOK NORTON BREWERY will be brewing 6 cask ales, each one brewed by a different member of the brewery team. They will also be taking their Shire Horses on a tour of their Hooky pubs, holding a beer festival at The Pear Tree, Hook Norton on Saturday 3rd October.

Additionally, they are running social media competitions throughout the week and will have special offers in their brewery shop and online at www.hooky.co.uk/shop

HYDES BREWERY will be running Cask Ale Week quizzes in their pubs throughout the Week.

ILKLEY BREWERY has launched their own ‘Drink Out to Help Out’ scheme during September. Wherever Ilkley beer is served, drinkers can send a photo of their receipt to do2ho@ilkleybrewery.co.uk and the brewery will match their spend with a voucher to use on  their webshop. There is a cap of £25 per order, but the offer can be used as many times throughout the month as customers like.

They will also be sharing a ‘Beer Series’ on their cask ales throughout the week on social media – and have pubs in the local area also involved with Stockport and South Manchester Beer Week.

For more details and to find the full list of Joule’s participating houses, visit: https://www.joulesbrewery.co.uk/our-latest-news/brewery-news/camra-sept-2020

JW LEES are putting a new seasonal cask beer (California Dreaming) in their managed houses throughout the week as well as posting a ‘day in the life’ video online following the brewing team.

They are also giving away a free pint of one of their ales to those that scan their certificate – which is in a really accessible place by the brewery bar.

LIVERPOOL BEER COLLECTIVE have put together a ‘Beer Blog’ listing where you can buy a great pint of cask in Liverpool. Visit: http://www.liverpoolbeercollective.com/blog/cask-ale-week-20

MAULDONS will be running ‘Real Ale Loyalty Cards’ at The Brewery Tap in Sudbury throughout Cask Ale Week. Customers who collect 7 stamps after buying 7 pints of real ale will receive their 8th pint free.

NEPTUNE BREWERY may have their 500th brew out during Cask Ale Week. Keep an eye out on for more information as to what it is going to be.

Their Taproom Takeout is also back on Friday, 25th September from 3pm to 7pm.

PUNCH TAVERNS have teamed up with Sharp’s Brewery to run a Loyalty Scheme: ‘Download the CaskFinder App and from the 14th Sept to 4th Oct, collect six scans via the app to receive a free pint’. Visit: https://caskaleweek.co.uk/free-pint-2020/ for more information.

SHARPS will be running a social media competition throughout the week.

SHEPHERD NEAME ‘s popular ‘Cask Club’ has returned to coincide with Cask Ale Week. From September 24 to October 4, green hop ale Oast Dodger (4.5% ABV) will be available in pubs and at the annual Kent Green Hop Fortnight which runs from September 25 to October 11.

For more information and to see a full list of participating pubs, visit: https://www.staustellbrewery.co.uk/article/cask-ale-week-2020

STOCKPORT AND SOUTH MANCHESTER CAMRA are encouraging visits to pubs across the whole of Stockport Borough, with a sort of ‘Drink Out to Help Out’ scheme. The events support an initiative promoting the local economy, connecting communities, and encouraging health & wellbeing.

The branch’s social media and website will post fun competitions to entice people to visit their local pubs, sample the cask ales and win beer-related prizes. Some pubs and breweries are offering discounts on cask beer or self-guided ale trails to collect stickers and get a free pint.

STONEGATE PUB COMPANY – Some of Stonegate’s pubs will be hosting Cask Ale Week quizzes throughout the Week.

Stonegate will also be offering the chance to win a staycation to Rock, Cornwall. Visit: https://www.greatukpubs.co.uk/competition/doom-bar-staycation?utm_source=caskmarque&utm_medium=web&utm_campaign=doom_bar

As well as giving away some two-for-one Doom Bar vouchers. See: https://www.classicinns.co.uk/competition/two-for-one-doom-bar?utm_source=caskmarque&utm_medium=web&utm_campaign=doom_bar

SWAN BREWERY are hosting their Hop Harvest Tasting Day during Cask Ale Week. On Friday, 2nd October, between 10am – 7pm, Swan Brewery will have a line-up of 5 cask ales available to try and buy. Including two batches of Green Swan 4.1%: their ever-popular light golden green hop beer. They will even give away a drink on the house to all visitors.

They are also using each day of Cask Ale Week to focus on nine of their core beers. Including history, awards, ingredients, tasting notes, etc. Search https://www.timothytaylor.co.uk/pint-finder to visit pubs selling these beers.