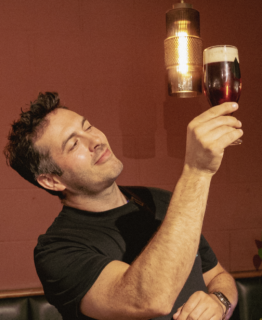 Alcohol-free brewer, Big Drop, is turning back the clock and tipping its hat to the founding fathers of brewing as it develops the world’s first 0.5% abv Cask Ale. Looking to add another string to its bow, Big Drop is consolidating its craft credentials with the special release of its Paradiso Citra IPA which will be vegan friendly and gluten free.

Big Drop will present the first AF Cask Ale to the world at London Craft Beer Festival (12th – 13th August) when thousands of beer aficionados descend on the capital and wet their whistles with Big Drop’s latest brainchild.

Cask Ales are served without the use of added gas as the carbonation is a natural by-product of the fermenting process. They are also usually intended to be served at a slightly higher temperature than products from kegs.

Johnny Clayton, Head of Production at Big Drop, commented: “With any beer product a lot depends on the dispense method and how the beer is looked after, this is even more true with cask. We have done our best to ensure it arrives in top condition and with any cask – once it’s broached – get ready to finish it off quickly before it oxidises.”

Big Drop only brews up to 0.5% and the same goes for its cask. A secondary fermentation creates light carbonation so Johnny and his team had to closely monitor the recipe to ensure that the precious 0.5% ceiling wasn’t breached.

Beer writer Melissa Cole commented in anticipation: “Big Drop continues to challenge the idea of what alcohol free beer can, or should, be and this is a great step to making non-alcoholic beer more appealing to a wider audience; as a huge fan of, what I consider, our national drink I can’t wait to try it.”

Neil Walker, Head of Communications at The Society of Independent Brewers, remarked: “SIBA Members Big Drop Brewing have been huge innovators in the alcohol free beer market for a number of years, but their development of an alcohol-free cask conditioned beer is perhaps their boldest and most exciting to date. I look forward to trying the beer when it launches at London Craft Beer Festival and am sure that if anybody can make a delicious cask beer at just 0.5% then it’s Big Drop – who have won many awards against full strength beers and proven that it’s possible to deliver superb flavour without the alcohol.”

Out of all the beers it could have chosen, Big Drop decided to launch its Cask with Paradiso Citra IPA. Paradiso is the starchild of the Big Drop stables, winning ‘World’s Best’ awards at the World Beer Awards and beating full-strength competition domestically. Likewise, Paradiso is the only ever AF beer to be awarded a Which? Best Buy.
Big Drop’s Vegan Paradiso Cask Ale will only be available at the London Craft Beer Festival.
Stay up to date with all the BIG news by signing up to Big Drop’s newsletter here:
https://shop.bigdropbrew.com/pages/subscribe-to-our-newsletter

About Big Drop: Big Drop was launched in 2016 as the world’s first brewer dedicated to alcohol-free beer by City lawyer, Rob Fink and long-time friend James Kindred. Both had recently become fathers and were looking to cut back on the booze but could not find any decent alternatives to their favourite craft beers. Recognised as the market leader in the rapidly growing AF craft beer sector, Big Drop has won over 85 international beer awards including seven times World’s Best at the World Beer Awards. Big Drop contract brews in batches through a network of brewing partners worldwide, meaning it can produce fresh beer – locally and ethically – with a minimal carbon footprint. Its range of beers, which are all <0.5% abv, can now be found in over 15,000 locations – including throughout Europe, Australia and North America. In the UK, Big Drop has listings with retailers (eg Sainsbury’s, Tesco, Waitrose, Morrisons and Ocado), throughout the on-trade as well as on doorsteps with Milk & More. For more information about Big Drop’s beers, tasting notes and availability, visit www.bigdropbrew.com.