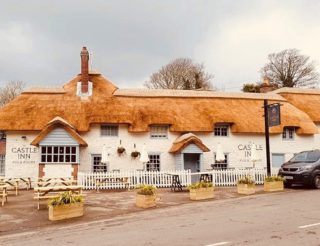 The Castle Inn, Butcombe’s first site in Dorset, re-opened on Sunday (25.03) to a full house of hungry locals and visitors, ahead of the Easter Weekend.

Following the major refurbishment, The Castle’s interior has been brought to life with bright, contemporary fabrics and eye-catching feature walls, designed to reflect the relaxed elegance associated with Butcombe’s estate. The 16th century thatched pub’s history has been retained where possible, with nods to the building’s architecture throughout the bar and dining room.

The Castle Inn’s new-look restaurant offers a daily-changing market menu focusing on grilled and seafood dishes, showcasing the finest Dorset produce, sourced from within 30 miles. Ashley Walcott, who previously worked at the Fat Duck in Bray under Heston Blumenthal has been appointed as the new head chef.

In addition, The Castle Inn will now offer 12 boutique ensuite bedrooms. Each room has been individually designed with quirky furnishings to complement the hotel’s beautiful location. Prices start from £89 per room per night.

The Castle Inn was acquired by the Liberation Group in October 2017. This pub is just a short walk from some of Dorset’s key landmarks including Lulworth Cove and Durdle Door, situated on the Jurassic Coast World Heritage site and surrounded by the Isle of Purbeck countryside. The pub will retain its dog-friendly reputation.

“The Castle Inn is our flagship pub in Dorset, and quite rightly a local favourite, so we knew we had to preserve its distinct character and heritage during the renovation. The team has worked tirelessly to get the site up and running ahead of what we hope will be a busy Easter weekend. The results of the refurbishment are fantastic. We’ve created a gorgeous, high quality site which fits perfectly with the surrounding countryside and coastline. We’re looking forward to welcoming The Castle’s strong, local following as well as new visitors over the coming weeks.”

Butcombe Brewery Co. was founded in 1978 and has been an icon of the real beer movement ever since. With an ever-expanding estate more than 40 pubs, Butcombe Brewing Co. now forms part of the Liberation Group, it is moving into a new, exciting phase of its journey, expanding its beer and cider range as well as its Pubs and Inns estate.