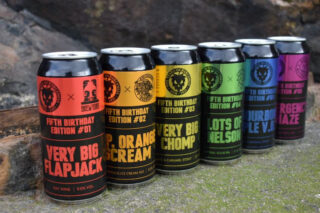 After a very busy week, Scottish brewery Fierce Beer is absolutely delighted to announce that its Fifth Birthday Edition beers are shipping early, and will launch next week.

Craig Cargill, Digital Sales Manager at Fierce Beer says “We’ve already started the mammoth task of scheduling in the orders with our couriers to get these shipped out to everyone on Monday and Tuesday next week, and can’t wait for everyone to try them!”

The beers are available to buy from the Fierce Beer online shop now at www.fiercebeer.com.

Dave Grant, Co-owner of Fierce Beer says “Things have been a little different for our birthday celebrations, but we’re looking forward to everyone receiving their beers next week, and finding out which one’s their favourite!”

The limited-edition beers are:

#01: Very Big Flapjack Oat Wine | 11.0%
An oaked oat wine brewed in collaboration with the amazing Brew York, who first impressed us with their outstanding Imperial Tonkoko.

#04: Lots of Nelson Imperial Sour IPA | 8.5%
An imperial sour IPA brewed in collaboration with New Zealand Beer Collective. Think ‘Three Nelsons’ that we collab brewed with LHG in 2018 but ramped up with Nelson Sauvin.

#06: Emergency Haze New England Triple IPA | 10.0%
A reworked version of our triple IPA ‘Emergency Shift’ brewed in collaboration with the epic folks from Dugges, Sweden – who believe it or not we did our first ever home collab with – ‘Wee Fierce Dugges’.