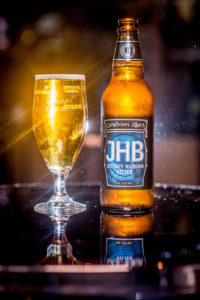 An award-winning brewery has signed a deal with a major supermarket chain to expand its range and makes more excellent craft beer available for discerning customers.

Asda is now stocking Oakham Ales’ Citra and Scarlet Macaw brands in 32 stores while JHB will be spreading its popularity from an existing 11 stores to 49 – offering beer drinkers the very best in terms of quality and consistency.

The Peterborough-based brewery, founded in 1993, has won a batch of industry awards and has an international reputation for its innovative approach. Oakham Ales is a pioneer of using American-grown hops in the UK and production director John Bryan makes regular trips across the Atlantic to select the hops which are used to make Oakham’s beers.

“Our customers are always at the heart of what we do, and increasing the Oakham Ales range at Asda will give them a great choice. Beers produced by independent breweries such as ours are becoming more popular and we work hard to ensure our beers are meeting increasingly high expectations,” said Nick Jones, off trade and export manager.

“We have had JHB listed with Asda for many years and had no hesitation in working with the company to introduce additional lines to the range,” he added.

Asda buying manager Alan Jackson said: “I am really proud of our bottled ale range and bringing more beers on board from Oakham Ales will only enhance our range.”

The news comes on the heels of an exclusive deal with Marks and Spencer for a canned version of Citra IPA; Wetherspoon increasing its range of Oakham Ales with Green Devil IPA and a tie-in with national chain Gourmet Burger Kitchen and Citra.

Citra (4.6%) was added to the Oakham range in 2009. It was a Gold Medal Winner at the International Beer Challenge in 2012 and 2013 and became Champion Golden Beer of GB in 2014. It is a light gold, refreshing beer that is now Oakham’s biggest selling.

Scarlet Macaw (4.8%) was inspired by the American Pale Ale styles and was first brewed in 2010 and a medal winner at the 2013 International Beer Challenge.

JHB – Jeffrey Hudson Bitter (4.2%) – has been listed with Asda for several years and was an award winner from its launch as Oakham’s first beer in 1993. Cask JHB was Supreme Champion Beer of Britain in 2001.

Issued on behalf of Oakham Ales and Barking Dog Media. Please call David Blackmore on 07754 271086 with any enquiry relating to this release.