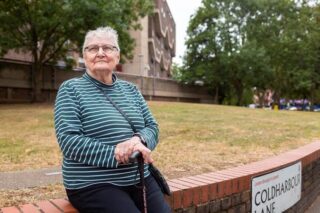 First brewed in 2015, Brixton Brewery’s refreshing craft lager is inspired by free-spirited Coldharbour Lane, which runs between Brixton and Camberwell. Their new content series, Characters of Coldharbour Lane, pays homage to some of the people who have made the street what it is today. From the architect of the building sometimes mistaken for Brixton Prison (which also inspired the zigzag pattern on the Coldharbour Lager cans) to the chip shop famous for its live DJs, Characters of Coldbarbour Lane celebrates a slice of time along this buzzing Brixton thoroughfare.

“We spoke to people who represent both ‘old’ and ‘new’ Brixton. Some who are running family businesses that have been on the street since the 1950s, and others more recently arrived. Despite their different stories, what struck us was how much everyone had in common: a deep respect for the local area, and a desire to serve their community as best they can. We also wanted to shine a light on businesses as they reopen after lockdown and the famous Brixton streetlife returns.” – Jez Galaun, Co-founder of Brixton Brewery

“When we came up with the idea, we were especially curious about the architect of the Barrier Block Estate, because it’s such a dominant feature on the street. We managed to disprove the local rumour that she committed suicide after her building was so heavily criticised by finding Magda and having her over for a beer and an absolutely fascinating chat. She’s turning 90 later this year, and still lives in Lambeth. She came to England from Poland in 1941, was studying architecture by the age of 15 and was a pioneering woman architect when there were very few. She designed the Barrier Block in response to a complicated challenge. It was meant to be next to a raised motorway. Thankfully the motorway was never built, and the Barrier Block is increasingly recognised as a major achievement, though it was funny to discover that Magda herself is not a fan. She loves a beer though!” – Xochitl Benjamin, Co-founder of Brixton Brewery

The photographs from the series along with excerpts from the interviews will be displayed at Brixton Brewery Taproom (Arch 548 Brixton Station Rd, Brixton, London SW9 8PF) from 23rd Sept – 7th Oct. The exhibition is free to all visitors to the taproom, which is now open for drinks on site. Walk-ins are welcome or you can book a table for up to 6 people by emailing taproom@brixtonbrewery.com. The taproom is also open for takeaway drinks, so you can pop in to see the exhibition and leave with a few cans of Coldharbour to enjoy at home! Opening hours and beer are available via our website www.brixtonbrewery.com.

Featured in the photographs are:

If you can’t make it down, the content will also be featured on Brixton Brewery’s social media channels over the coming month and will feature in Posterzine issue 61, coming out in September.

Started in a railway arch in 2013, Brixton Brewery was the dream of two couples who wanted to put Brixton on the map for great beer. They had met by chance in a local bar and bonded over their shared passion for beer and for the non-stop energy of the South London neighbourhood they all called home.

The free-spirited Coldharbour Lane provided the spark of inspiration they needed to create Coldharbour Lager, a pilsner-style beer with Bohemian origins. The can design references the iconic Barrier Block’s zig zag lines and distinctive railings. Precisely crafted and full of flavour, Coldharbour Lager is the perfect refuge from thirst.