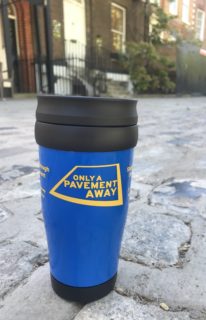 One year on from its official launch at the House of Commons on World Homeless Day (10 October 2018), Only a Pavement Away (OAPA) is celebrating the fact that over 50 homeless people have found employment in the hospitality industry thanks to its work, saving the Government around £1.25 million.

OAPA was established to help those on the streets, or people who are ‘sofa surfing’ find employment in the hospitality industry, by creating an effective conduit between employers and organisations which exist to support the homeless, as well as ex-offenders and vulnerable veterans.

It does this by providing a centralised free jobs board for prospective hospitality industry employers on which to place their vacancies which is accessible to all OAPA partner charity and association job brokering teams, saving both the employers and the charities from having to contact several different organisations, which can be incredibly time consuming.

In the 12 months since its launch, founder and CEO, Greg Mangham, has worked tirelessly to establish partnerships with homeless charities, as well as pub, restaurant and hotel groups throughout the country. To date, OAPA beneficiaries have been placed in employment in either front or back-of-house roles, with Fuller’s, Greene King, PubLove, Youngs, Honest Burger, The Ivy Collection and Petersham Nurseries.

Over the next year, OAPA aims to help a further 250 homeless people find work. To achieve that, it is looking for more hospitality businesses to partner with and offer employment to the homeless, as well as funding from industry backers. There are currently 32 employers signed up and participating in the programme, however, in order to reach the goal of helping 250 people find employment, OAPA will need to raise £250,000 in development and operational funding.

Greg said: “The last year has been hard work, but incredibly rewarding. I had hoped to place more people in work during the first year, but it has taken time to get the systems we need to make the process run smoothly up and running. But we are there now and I am incredibly proud that we have been able to place over 50 homeless people in employment in year one.

“This is just the beginning. On average, one homeless person dies every fortnight on our streets. In addition, 70,000 ex-offenders are released each year with just £46 discharge grant in their pockets. On top of that, there are 6,000 vulnerable veterans with no permanent address and a shocking 50,000 veterans coping with mental health issues.  In a country with the fifth largest economy, homelessness is a scandal – it is not acceptable. We founded Only A Pavement Away to help to change that.”

It is estimated that each homeless person costs society around £25k per annum. OAPA member support is a one-off cost of approximately £1,200. If OAPA places 500 people in work, it is estimated that society would benefit by around £100m over a 10-year period.

Greg added: “Between now and 2024, the UK hospitality industry will be looking for around 1.3 million employees, of which, some 300,000 will be new positions. These positions can be filled by homeless people who want to return to work, saving millions of pounds. That money could be used to employ an additional 250 nurses per annum. It’s a win-win situation.”

As well as partnering with prospective employers, driving awareness has been a key focus for OAPA in its inaugural year. Over the summer, Greg and the team launched the ‘Fill A Flask’ campaign, handing out over 3,000 OAPA branded flasks in London, Brighton and Manchester, to keep the homeless hydrated. The durable flasks can be used throughout the year and the public are encouraged to fill a homeless person’s flask with either a hot or cold drink, according to their needs.

Now, as we move into winter, the focus has changed to helping more than 3,500 rough sleepers stay warm through what experts predict to be one of the coldest winters in three decades[1]. The ‘Winter Warmth’ campaign launches on Friday 1st November and will see the hospitality industry unite to collect and distribute donations of coats, blankets and sleeping bags, as well as OAPA branded handwarmers. We have started a fund for industry employers and staff to donate to the cause, which will enable us to produce the handwarmers. Donations can be made at: https://onlyapavementaway.co.uk/winter-warmth-campaign/

Greg said: “Our main focus is to help get people off the streets and into employment, but as a short-term measure, and to help raise awareness of Only A Pavement Away amongst the homeless community, we are doing what we can to make life more bearable. Winter is a terrible time to be on the streets so I really hope the hospitality industry will unite to support our Winter Warmth campaign and help make life just a little more bearable for those unfortunate enough to find themselves exposed to the elements night after night on the streets.”

OAPA was launched in the same year as the Government’s Rough Sleeping Initiative. Minister for Homelessness, Luke Hall MP, recently announced a further £54million in funding for 2020-2021 which Greg has welcomed. He said: “Additional funding is vital to help get the homeless off the streets, so this announcement is very good news. I am planning to meet with Mr Hall in the coming weeks to discuss how OAPA can help support the Rough Sleeping Initiative. Together, I believe we can end homelessness for good.”

Companies wishing to get involved, or financially support the charity through donations please contact: fundraising@onlyapavementaway.co.uk

Greg Mangham can be contacted on: gregmangham@onlyapavementaway.co.uk.

Only A Pavement Away is registered with the Charities Commission Registration no. 1178082