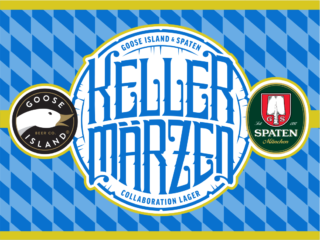 Brewed overseas at Spaten Brauerei, ‘Keller Märzen,’ has been traditionally brewed as all German Märzen beers are, in the month of March and then largered in cellars at near-freezing temperatures. The result is a delicious smooth, malty and unfiltered amber beer with light, bready, sweetness and a delicate German hop flavour.

Mike Siegel, from Goose Island Beer Co. comments on the story behind the collaboration:“With Keller Märzen, we at Goose Island wanted to pay tribute to the history of Spaten, their brewery, and impact on lager brewing. The late great British beer writer Michael Jackson said the “most significant German brewery in the development of lager brewing was Spaten”. We are thrilled to have the opportunity to collaborate with them on a new beer release, Keller Märzen.

Keller Märzen was brewed in March (März being the German word for March), as was traditional practice for the Märzen process of brewing beer, and long lagered for 3 months at zero degrees Celsius in the cavernous Spaten cellar (Keller in German). Traditional Bavarian Kellerbier is served unfiltered, so Keller Märzen will have a light haze.”

This exciting one off collaboration will be launched and available to all who attend Goose Island’s, LDN Block Party on 23 September. The one-day festival is known for bringing a slice of Chicago life to London and celebrates the best music, local food, Goose Island beer and art from local artists. During the day festival-goers will be able to try the delicious new lager whilst enjoying an American Hotdog from Engine Dogs, the perfect food pairing!

Keller Märzen is a malty German amber lager, which has undergone a very clean fermentation process. The beer itself has many delicious rich toasty and bready notes finished off with caramel and dry biscuit flavours. As this collaboration lager is unfiltered there will be slightly more body and yeasty character than its filtered counterparts.

Cheese: Try with an aged cheese such as Gouda or Cheddar. The bread notes in this beer will help to bridge the nutty and caramel notes from the aged cheese.

Meat: Pork belly or pork shoulder will work really well with Keller Märzen because the fatty and saltiness of the meat will marry well with the beer. A British favourite, roast chicken will also complement the beer notes well. Sausages dishes and hotdogs are of course, a match made in heaven!

BBQ food: Try with some beef BBQ staples such as burgers or steak which will play on the amber malts and caramel characters of the beer.