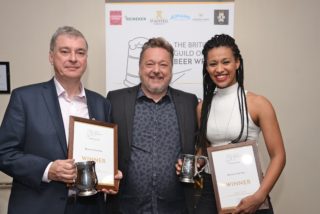 We’re extending the deadline for nominations for our Brewer of the Year Award to give more members a chance to take part.  We need your nominations by next Monday, 21st October.

Every year, the Guild of Beer Writers kicks off its annual awards ceremony by announcing its Brewer of the Year. Last year, for the first time, the Board opened up the process by asking members to first nominate candidates and then vote for the winner.  It was a great success and this is now the way the winner of this  illustrious award will be chosen.

So, if there’s a brewer who you think deserves this accolade, please email Guild Chair Pete Brown on petebrownsemail@googlemail.com with the brewer’s name and a line or two stating why you think they should win. The Guild Board will then go through the suggestions we receive and create a shortlist which will then be launched online. All Guild members –  full, associate and corporate – will then have a chance to vote and the winner will be announced at the Guild dinner on 3rd December.