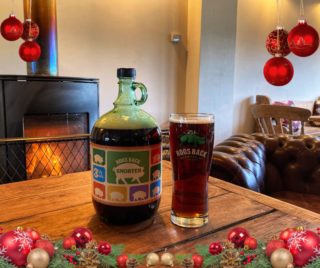 It’s beginning to look a lot like Christmas at Hogs Back Brewery in Tongham, as the brewer unveils a packed festive programme in its newly refurbished Tap bar.

Starting on 2nd December, the musical line-up covers all genres from rock to brass bands, free music on Saturday nights and selected Thursday and Fridays through the month, as well as family-friendly events including a carol concert and quiz – all to be enjoyed with a glass of brewery-fresh Hogs Back beer, and a home-cooked meal or snack from the new menu.

The Tap Room has been refurbished with a focus on comfort, adding new cosy corners and soft seating, as well as an heated outdoor marquee. The new bar offers a wide selection of Hogs Back draught beers fresh from the cellar, including returning Christmas favourite Advent Ale, as well as locally distilled gins and a new wine list.

With the newly installed kitchen comes a new, broader menu. The popular stone-baked pizzas, cooked on the outdoor pizza oven, are joined by hearty winter favourites such as Beef Stew and Vegan Sweet Potato Pie, a selection of sharing platters and a Special Sunday menu. All food is freshly prepared, and sourced from ingredients within a 30-mile radius wherever possible.

Trading hours are extending during December, including a new, earlier opening time of 10.00 am on Friday, Saturday and Sunday, offering tea, coffee and cakes baked by local Loseley Bakery – ideal for visitors heading to the Hogs Back Brewery Shop for their festive beer purchases. Beer and other alcoholic drinks will be served after midday.

Rupert Thompson, Hogs Back Brewery managing director, said: “Building the Brewery Tap has been a huge project for us and it’s rewarding to see it now complete in time for Christmas.

“We’re very proud of all we have to offer over the festive season: wonderful fresh beers, delicious local food and an amazing range of entertainment. We’re looking forward to welcoming guests between now and Christmas and can promise them all a wonderful time whether visiting us with friends, family, or for an office party.”

Some of the entertainment highlights, many of them local bands, include:

For a full list of entertainment, opening hours and menus, or to find out about office or other festive group events at the Hogs Back Tap, visit www.hogsback.co.uk

Press release from Hogs Back