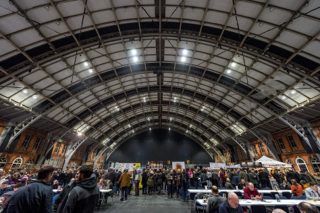 Fans of traditional fruit drinks are in for a treat this month as the North’s biggest beer and cider festival opens in Manchester.

Organisers of the Manchester Beer and Cider Festival have a reputation for showcasing the best from traditional cider and perry producing regions alongside the developing northern scene. A staggering 73 ciders and perrys picked from 40 different producers will be on offer during the three days of the event. But that only tells part of the story.

Regular visitors will be able to spot firm festival favourites, but handpumps, a cooling system and bottled ciders and perries will debut on a revised layout. And an innovation – believed to be a national first for Manchester – will see six keg-conditioned ciders dispensed. The equivalent to real ales maturing in cask, live yeasts continue to react with sugars, further conditioning and stabilising the cider.

Cider and perry bar manager Dick Withecombe said: “The festival has a reputation for innovation in beer. But this year, we aim to match that modernisation with the impetus that the ReThink Cider initiative has given us. ReThink Cider is about improving the way cider is perceived. And in line with CAMRA’s priorities, we want to educate drinkers about the diverse styles of cider and perry. Many producers have the skills normally associated with winemakers. ReThink Cider aims to showcase that while harnessing the broad appeal of real ales.

“Somerset and Herefordshire are usually regarded as the core area for production and are well-represented, but we have an extensive selection from Greater Manchester and Yorkshire. And we have handpicked some of the best from Wales, Kent and even the United States!

“We have selected some of the younger, innovative cider makers, and our range will reflect the increasing involvement of women in producing and enjoying cider.”

Real cider and perry are traditional products made naturally from selected varieties of apples and pears; a world away from the industrially-produced cheap namesakes. The natural yeasts from freshly-pressed apples or pears ferments the juices, producing alcohol and CO2 and are matured in barrels before being released to enjoy. Real cider and perry are never carbonated or pasteurised, a status they share with real ale.

Cider and perry need to be taken seriously as they are usually much stronger than real ales. Most of what Dick and his team of volunteers will offer are 6% (ABV) and over. Helpfully, measures as small as one-third pints can be enjoyed, allowing drinkers to safely experience a range of styles.

Unlike their beer counterparts, cider and perry production is seasonal, with October the busiest month. Many of the ciders will have been maturing for a year. Dick added: “As natural products, cider and perry are dependent on growing conditions. According to Tom Oliver, a legendary producer who will be running a tutored tasting session at the festival, the quality of the 2018 fruit harvest was excellent. Get along and try cider and perry – we may even convert you! ”

Manchester Beer and Cider Festival runs from Thursday 23rd to Saturday 25th January 2020 at Manchester Central. Tickets for entry and the special tasting events are on sale at the festival’s website, www.mancbeerfest.uk where the complete cider and perry listing can be viewed.

1. The Manchester Beer & Cider Festival is organised by volunteers from the nine Greater Manchester branches of the Campaign for Real Ale (CAMRA).

3. Advance tickets for the 2020 festival can be bought via mancbeerfest.uk/tickets or Eventbrite.co.uk.

4. Entry prices include £3 refundable glass hire and are from £7.

6. A supporting sample photograph is attached (hi res image on request). A large selection is available at https://www.flickr.com/photos/mancbeerfest/albums

7. There will be a trade and media preview afternoon between 3pm and 5pm on Wednesday 22nd January. This will be followed by a preview for CAMRA members only to 9pm. Media organisations can be added to the invitation list by contacting press@mancbeerfest.uk