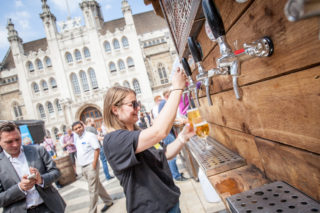 Visitors to the City of London’s historic Guildhall Yard on Thursday 18 July will be able to enjoy some of the UK’s finest ales, beers and ciders, as City Beerfest returns for the seventh year running.

For the first time, City Beerfest will welcome low- and non-alcoholic brewers to the event, in collaboration with Club Soda.

All proceeds from City Beerfest will go towards The Lord Mayor’s Appeal, which supports his three dedicated charities – Samaritans, Place2Be, and OnSide Youth Zones.

The sale of tokens, which can be purchased in advance or on the day in Guildhall Yard, raises money for these good causes and pays for your chosen drinks and a specially branded City Beerfest glass. The event is free to enter.

“Over the last seven years, City Beerfest has established itself as one of the most enjoyable events in the City of London’s calendar, creating a real buzz in our historic Guildhall Yard and raising money for my Appeal.

“As well as sampling some of the beers and ales on offer, I hope that I will be allowed to pull a few pints for customers to show my gratitude for their support.”

“The Brewers’ Company is delighted that so many of our member breweries are, once again, supporting the City Beerfest to raise money for The Lord Mayor’s Appeal.

“For over 600 years, we have made sure that the people of London have access to great beer, and this event in the heart of the City is a fantastic way to continue this long tradition.”

The City of London Corporation, which supports City Beerfest and owns and manages Guildhall Yard, is the fourth largest funder of heritage and cultural activities in the UK and invests over £100m every year.

It is also developing Culture Mile between Farringdon and Moorgate – a multi-million-pound investment which will create a new cultural and creative destination for London.

City Beerfest 2019 will be held in Guildhall Yard, EC2, from 12.30pm to 9pm on Thursday 18 July. See www.citybeerfest.org for further details.

City Beerfest was created in 2013 as a joint initiative between The Lord Mayor’s Appeal, City Music Foundation, and the Worshipful Company of Brewers.

About the City of London Corporation

The City of London Corporation is the governing body of the Square Mile dedicated to a vibrant and thriving City, supporting a diverse and sustainable London within a globally-successful UK. www.cityoflondon.gov.uk

About the Worshipful Company of Brewers

The Brewers’ Company is one of the oldest Livery Companies in the City of London and ranks 14th in order of precedence. The Company received its first charter from Henry VI in 1438 when the brewers were incorporated as “The Wardens and Commonalty of the Mystery or Art of Brewers of the City of London.”  Its aims are to promote interaction between brewery companies, for the benefit of the industry and its members alike, while also supporting its charitable foundations (principally education focused) and the governance of the City of London.