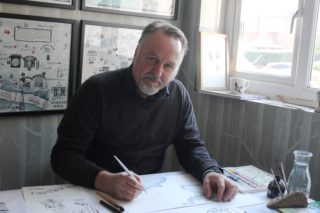 A new map and guide, produced by Britain’s oldest brewer, celebrates both Shepherd Neame’s unique collection of City pubs and also the rich history of the Square Mile itself.

Available in a handy pocket-sized format which folds out into a unique and specially designed map, The City of London Walk is designed to get people out and about in the historic Square Mile, visiting some of Shepherd Neame’s classic City taverns and drinking some great beer.

Shepherd Neame have seven pubs located in the City of London itself, including such iconic venues as the Jamaica Wine House in St Michael’s Alley, the Old Doctor Butler’s Head in Mason’s Avenue and the Bishops Finger, near Smithfield Meat Market.

All are included on the tour itinerary, with the addition of the Betsey Trotwood in Clerkenwell, just outside the City boundary.

The map will be available to pick-up at all of the pubs on the route.

A digital version is also available for download at: https://www.shepherdneame.co.uk/city-london-walk

Review copies are available on request.

The walk takes about two and a half hours without stopping for drinks and is about three miles long.

It was drawn by artist Peter Gander who lives and works in Herne Bay, Kent and was written by Johnny Homer, who works in the Shepherd Neame communications department and has written several books on pubs and brewing and regularly broadcasts on BBC Radio London on the history of London.

The Jamaica Wine House is reckoned to be the first place in London where coffee was sold, around 1652, before evolving into the Grade II listed pub it is today. It is known by generations of City workers as the Jampot.

The Old Doctor’s Butler’s Head is named after Dr William Butler, court physician to James I and the inventor of a ‘medicinal ale’ that enjoyed great popularity throughout 17thCentury London.

The Bishops Finger in West Smithfield was Shepherd Neame’s very first London pub. It takes its name from the classic, strong Kentish ale produced by the brewery for more than 60 years.