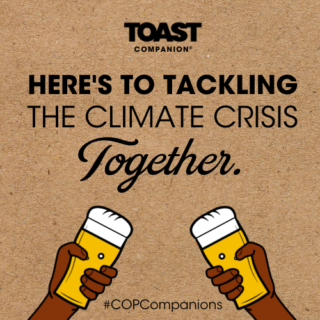 Today (Friday 15 October), a coalition of 25 breweries from across the UK and Ireland have released an open letter calling on world leaders to make concrete commitments to tackle the climate emergency at COP26 next month.

The letter urges leaders to seize the ‘once in a lifetime opportunity to protect people and nature from the effects of the global climate crisis.’ It highlights reducing food waste as a key measure in reducing greenhouse gas emissions and deforestation, citing evidence that food systems are responsible for one-third of GHG emissions[1] and 80% of deforestation.[2]

Alongside the open letter, each participating brewery has brewed a new beer for the Companion Series, a limited-edition collection of beers that use surplus bread that would otherwise have gone to waste. Toast Ale, who coordinated the series and letter, has been brewing with bread since the company was founded in 2015. They have supplied pre-prepared surplus crumb and shared expertise with the fellow breweries to support the circular economy at this critical time.

There will be 2,600 Companion Series boxes available to purchase from today, with £26 from each sale invested in conservation and regenerative agriculture projects. Toast Ale is partnering with Rainforest Trust UK to protect 3.25 million trees in threatened tropical rainforests, whilst a collaboration with Soil Heroes will support UK farmers to replenish the health of soils, sequestering 360 tonnes of CO2 as well as holding more water and improving biodiversity. The Companion Series is expected to raise over £65,000 for these projects.

Tristram Stuart – author, campaigner and co-founder of Toast Ale – said: “It’s exciting to be launching the Companion Series alongside 24 of our Companion breweries. Not only are we raising funds for two fantastic organisations doing important work within forest conservation and regenerative agriculture, we’re also sending a message to world leaders, fellow businesses and society at large that we are committed to collaborating in order to tackle a problem that is bigger than all of us.

“The latest IPCC report reminds us that we have a narrow window to reduce further warming of our planet, and it’s closing rapidly. Food systems are responsible for one-third of GHG emissions and 80% of deforestation. However, one-third of the world’s food is never eaten, an unnecessary use of the land and resources, and emissions of greenhouse gases, to produce it. As a business dedicated to positive social and environmental change, we’re dedicated to sharing our expertise and ethos with fellow breweries to make progress in reducing these numbers.

“But we also need governments to make the necessary policy commitments, which is why we’re challenging world leaders and COP negotiators with our open letter. We hope that those responsible for making policy decisions and setting international targets at COP will ‘use their loaves’ and work together to take meaningful action for the sake of our collective future.”

In the letter, the breweries say they are ‘laying down the gauntlet’ for world governments to follow their lead and to collaborate in order to combat the climate emergency. Participating breweries range from household names such as Guinness to smaller, independent breweries such as Fyne Ales, a family-owned Scottish farm brewery in Argyll.

Jamie Delap, Managing Director  at Fyne Ales said: “From day one, our farm brewery set out not only to protect our local environment, but to enhance it too. Our corner of rural Scotland isn’t just home to our brewery. Our herds of red deer and highland cattle are fed on spent grain from the brewing process, and we have a long track record of sustainability initiatives we’ve undertaken to ensure our Glen Fyne home thrives for years to come.

“We believe we all have a role to play in protecting our planet for future generations. The opportunity to join Toast’s project and learn more about using food waste to further reduce our impact on the wider environment, and highlight the role of food waste in climate change, was too good to miss – especially with COP26 taking place down the road in Glasgow this year.”

Peter Simpson, Head Brewer at the Guinness Open Gate Brewery, said: ​​“At the Guinness Open Gate Brewery, we are 100% committed to brewing sustainable beer for everyone. We look to the future with the same pioneering, inventive and visionary spirit that Arthur Guinness had. When the opportunity to partner with Toast arose to brew beer using surplus bread for the Companion Series, we jumped at it. We like nothing more than experimenting to see what’s possible. It is a key focus for us and is what keeps us excited for future innovations and delivering long lasting change.”

The limited-edition Companion Series retails at £89.95 and is available for purchase on Toast’s website from today. £26 from each box will go towards projects run by Rainforest Trust UK and Soil Heroes. The 26 beers in the series will be available on draught at London’s Tate Modern as part of a collaboration with Tate Eats, launching at the Tate Lates event on 29th October and running through to 12th November. The draught beers will also be pouring at most of the partner brewery taprooms, including a Signature Brew tap takeover and the Head of Steam pub estate.

Toast has brewed two new beers for the Companion Series. Their ‘For the Planet’ Juicy IPA, brewed with surplus fresh bread, organic malt, and British oats and wheat, is a collaboration with Race to Zero, Business Declares and Zero Hour (the campaign for the Climate and Ecological Emergency Bill). Their ‘For People’ Coffee Porter is brewed in collaboration with Cafédirect, using surplus bread and Brazilian coffee beans.

Toast brews planet-saving beer using surplus fresh bread to prevent food waste and reduce the demand for malted barley. Toast open sources a recipe for home brewers and collaborates with breweries all over the world to scale its impact. All its profits go to charities fixing the food system.

Toast is a social enterprise, the first UK brewery to become a B Corp and winner of the 2021 Queen’s Award for Enterprise for Sustainable Development.