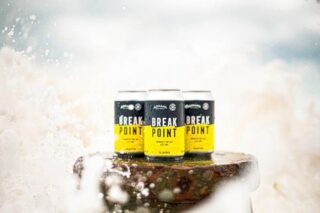 Southwold-based sustainable brewery, Adnams, has teamed up with Harbour Brewing Co of Cornwall to launch the second beer in its 2021 collaboration brew series, Break Point. Inspired by Harbour Brewing Co’s farm home, the coastal breweries have collaborated on a Farmhouse Pale Ale, with big waves of tropical fruit. With the launch of Break Point, Adnams is committing to the removal of plastic from all future twelve-pack collaboration brew cases, which marks the next stage of Adnams’ commitment to building a sustainable future.

Break Point will be available from Adnams.co.uk and on cask in selected outlets from 8thJune 2021.

Embracing the farmhouse brewing process, Break Point is fermented with a Norwegian kveik yeast strain, known for generating deep, fruity flavours and aromas. This fruitiness is heightened with citrus Citra hops and balanced with a biscuity, caramelised undercurrent from locally sourced malted barley, and rye from Jonathan Adnams’ farm. The result is a light, juicy farmhouse pale ale, the colour of fresh straw.

Adnams Head Brewer, Fergus Fitzgerald, says “I’ve known Eddie Lofthouse, the founder of Harbour, since 2015 and immediately fell in love with the brewery’s connection to their local environment and commitment to working with what nature has supplied them. At Adnams, we share that sense of place, and our coastal locations clearly influence our outlook.

We really enjoyed collaborating with Harbour Head Brewer, Genevieve Upton, to design Break Point. This was our first time working with a kveik yeast strain and we were very excited in Southwold. It produced lovely, crisp, tropical fruit flavours which are really going to lend themselves to summer drinking.

This collaboration and its environmental commitment also focussed our attention on our packaging, and we are really motivated to removing as much plastic as we can moving forward.”

Each new beer in Adnams’ 2021 collaboration series will support a sustainability commitment, continuing to build on Adnams’ eco-friendly values. In addition to the removal of plastic packaging, all new Adnams products will launch in cardboard cartons rather than shrink-wrapped trays. With this pledge Adnams estimates reducing plastic consumption by 1.8 tonnes over the next 12 months.

Fresh from Southwold, via Cornwall, Break Point is priced at £22.99/case of 12 x 330ml cans and 4.8% ABV, it is available at Adnams.co.uk and on cask in selected outlets from 8th June.

Available for a limited period in Adnams stores, online at Adnams.co.uk, and on cask in selected outlets

Established in 1872 as an independent Suffolk-based brewery, founded by George and Ernest Adnams. In 2010 Adnams became the first brewer in England to build a distillery on the same site, which is now where it creates award-winning handcrafted spirits, including the ‘World’s Best Gin’*, Copper House Dry Gin, and the ‘World’s Best Vodka’**, Longshore Triple Malt Vodka.

In 2020, Adnams was awarded Gold for the East Coast Vodka, and Silver for both the Longshore Triple Malt Vodka and Rye Malt Whisky at the IWSC 2020 awards.

Adnams produces a wide range of cask, keg, bottled and canned beers and owns and manages nine hotels, pubs and inns as well as several retail stores. At its heart it is still an independent, values-based family business committed to a sustainable future. In 2020, Adnams won its third Queens’ Award for Enterprise in Sustainability.

Founded in 2012, The Harbour Brewing Co started with a fledgling idea: to brew proper beer reflecting the land and shores from where it came. Taking the best raw ingredients – awesome hops and Cornish spring water tapped straight from the source – and bringing them to life through dedication to technique. The concept evolved by the ocean, but came into being on the farm. As well as their main site, Harbour have a smaller brewhouse where they brew with local ingredients, it is in essence a farmhouse brewery. Harbour matches love for the traditional Cornish lifestyle with modern brewing techniques, to brew solid, well rounded beers that reflect the ruggedness of Cornwall. The heritage of the space, the land and the ocean remain the inspiration behind Harbour Brewing Co.

Press release from Phipps Relations on behalf of Adnams