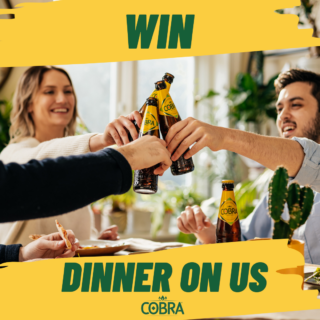 Cobra is celebrating the opening of indoor dining by giving consumers the chance to win a meal for two at their favourite restaurant.

The ‘Dinner on Us’ campaign will see Cobra give away 250 ‘meals for two’ to help encourage people to enjoy a night out at a restaurant of their choice. Until the 21st June, consumers can enter by following Cobra’s Instagram account (@cobrabeer), liking the campaign post, tagging the person they’d want to take out, and commenting on the post with #dinneroncobra.

Cobra is also awarding a free keg of Cobra Premium to restaurants if a consumer who enters the competition chooses their venue to dine in.

The campaign is supported by a social media campaign and point-of-sale material to encourage consumers to enter online.

Lord Bilimoria, Founder and Chairman of Cobra, said: “It has been a long time since friends and family have been able to enjoy a proper dining experience at their favourite restaurant. The ‘Dinner on Us’ campaign is all about bringing people together after lockdown to celebrate indoor dining opening back up, giving our much-loved restaurants a boost and giving consumers a long-awaited treat meal at a venue of their choice.

“Over the coming weeks we’ll be drumming up excitement via social media and POS material to help raise awareness of the campaign and drive footfall in restaurants up and down the country at this critical time.”

The Cobra Beer Partnership is a joint venture company that combines the brewing, selling and marketing expertise of the highly successful international brewer Molson Coors, with Cobra Beer’s iconic brand and strong presence in ethnic restaurants, off-trade and the on-trade. Formed in May 2009, the Cobra Beer Partnership is chaired by Cobra Beer’s founder, Lord Karan Bilimoria with the day to day operations managed by Molson Coors (UK).

Lord Karan Bilimoria founded Cobra Beer in 1989. He launched Cobra Beer when he realised that Britain deserved a better, smoother, less gassy lager. Not just smoother, but one which complemented food, and could appeal to both ale and lager drinkers alike. Originally imported from Bangalore, Cobra is brewed to a traditional Indian recipe with a modern twist for an extra smooth taste. Only the finest natural ingredients are used including barley malt, rice, maize, wheat, and three varieties of hops. Cobra Beer is now the No. 1 selling beer in Indian restaurants in UK, and is also one of the strongest and best known brands in the world beer category in the UK. Cobra has been exported to over 40 countries around the world. The Cobra Beer portfolio is also one of the most highly awarded. In the Monde Selection, one of the most prestigious quality awards in the world for beer, Cobra Beer has been awarded a total of 121 Gold Medals since 2001.