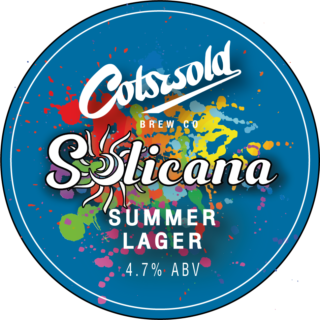 The fifteenth birthday celebrations roll on for Cotswold Brew Co this year as they announce the launch of their summer lager, ‘Solicana’. Due for release in early May, the new seasonal will make use of British hop ‘Olicana’ as the headliner, a relatively new variety with fruity and tropical character that parallels those of popular New World hops. The launch also marks the first occasion that an adjunct has appeared on one of their brew sheets – rice.

“The launch of ‘Solicana’ is very much a continuation of what we wanted to achieve last year with the launch of our long-matured beers, and that is to challenge popular perceptions of lager,” said Jake Salter, Business Development Executive at Cotswold Brew Co.

“This time we’ve added another dimension to that challenge with the use of rice as an adjunct grain, which is often negatively viewed as a cheap grain that adds little-to-no character and thins out the beer. We want to show people that you can make a great lager with rice. This will be a completely different style of lager to anything we have brewed before by really allowing the hop character of Olicana to shine through and give drinkers something different, full of flavour, and easy-drinking over the summer.”

Brewed to an alcohol-by-volume (ABV) of 4.7%, this a contrast to the higher strength offerings of the well-received long-matured lagers from Cotswold Brew Co last year. As well as the addition of rice, this adds even more diversity to their range by being the first beer between 4-5% ABV.

Launching on Monday, 4th May, ‘Solicana’ will be available in 30 litre kegs, as well as cases of 12x330ml bottles.


Founded in 2005 by Rick & Emma Keene, Cotswold Brew Co is a microbrewery, based in Bourton-on-the-Water, that specialises in brewing lager styles. Their core aims are to raise the standards of lager brewing in the UK and give drinkers more choice with their core range of six distinct lagers as well as regular seasonals.