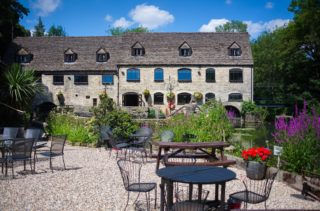 Pub operator and brewer Brakspear has purchased the Egypt Mill in Nailsworth, near Stroud. The historic pub with dining, accommodation and a thriving wedding and functions business takes Brakspear’s managed estate up to 16 sites.

A converted mill, the site dates back to the 16th century, and the restaurant overlooks the river running through the grounds. Each of the 32 bedrooms has been individually designed and the site can cater for weddings and celebrations for up to 150 guests.

The site has been owned for the last 100 years by the Webb family, who were keen to sell their business to another family-run company.  Brakspear has no immediate plans to make any changes to the Egypt Mill and is retaining the current staff team, who have contributed to the site’s success.

Tom Davies, Brakspear chief executive, said: “The Egypt Mill oozes character throughout the building and grounds and we are thrilled to be adding it to our managed estate.

“The site gives us a second wedding and functions business in the Cotswolds, which we have offered at the Frogmill near Cheltenham since 2018.  Our learnings from there will help us to develop the already successful business at the Egypt Mill and we’re confident the two together will create a very strong offer for anyone wanting to wed or celebrate in the region.

“It’s not just about functions though; the Egypt Mill has an excellent reputation for its food and is a popular weekend break destination with its quirky but luxurious bedrooms. We’re excited about the potential offered by this exceptional site.”

Brakspear’s managed estate was was formed in 2013 with the opening of the Bull on Bell Street in Henley-on-Thames and includes pubs across the Cotswolds and south east, many of them with luxury accommodation.

The Brakspear managed estate now comprises 16 pubs across the Cotswolds and the south east., 10 of them with rooms. In addition to the Egypt Mill, they are:

Issued on behalf of:    Brakspear