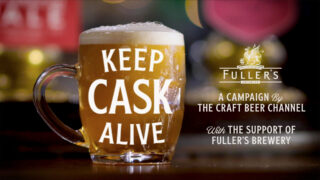 Award-winning Youtube channel will release five episodes about Britain’s cask ale scene throughout October as part of a campaign to highlight the joy of our brewing and pub heritage.

Youtube’s biggest beer channel has teamed up with Asahi, owners of the Fuller’s Griffin Brewery and Dark Star, to produce a documentary series about Britain’s cask ale culture – with the long-term aim of getting real ale recognised by UNESCO as an example of Intangible Cultural Heritage.

Across five episodes The Craft Beer Channel will investigate the challenges cask beer faces in the modern world, while focusing on the beers, people and breweries that make it great. With Britain’s traditional serving format still in severe decline and heavily affected by the COVI-related lockdowns, there’s never been a more important time to support real ale and tell its stories in a way that appeals to modern drinkers. The series forms the main part of a new campaign, Keep Cask Alive, instigated by Asahi UK and taken on by the Craft Beer Channel.

On their journey around England presenters Jonny Garrett and Brad Evans visit a traditional boozer on Old Street’s silicon roundabout, witness a brew on one of the world’s oldest brew kits, visit the breweries that kick started the craft beer movement, down pints with punks in Margate’s micropubs, push cask ale to its limits with bold New England IPAs and explore the history of Fuller’s own world-famous Vintage Ale. Dozens of different breweries and amazing real ale pubs are featured, including interviews and tours with Hook Norton, Abbeydale, Darkstar and Gadds.

The videos will be released weekly via the Craft Beer Channel on Youtube from the 29th September, just in time for Cask Ale Week. The finale will air on the 27th October, when work will begin to persuade UNESCO to take action. The docu-series is funded by Asahi UK, who hope to bring attention to the entire category in a bid to support traditional breweries of all sizes and help assure new drinkers discover the joy of live cask ale. It’s hoped more breweries, media and drinkers will get involved with the campaign as it develops.

Jonny, co-founder of the Craft Beer Channel says: “Both Brad and I grew up drinking cask ale, but we’ve definitely neglected it on the channel until now. With the decline it’s endured and how hard it was hit by the pandemic, we thought it was vital that we stepped up and tried to make people re-examine their prejudices and assumptions.

While we’re looking to protect it, we wanted to make something joyful, modern and narrative to get people excited and I think we’ve done that with the stories we’ve told.”

Brad, co-founder of the Craft Beer Channel, says: “Cask at its best is by far the best way to present beer. It’s like fresh bread out of the oven, and it’s crazy that we don’t celebrate it more in the UK. We’ve got really good at telling the stories of American-style breweries, but looking much closer to home has been a bit of a revelation for us, and I hope it is for the viewers too.”

Guy Stewart, Head Brewer at Fuller’s Griffin Brewery says: “Vintage Ale is always a key calendar moment for us. It’s a fantastic way to celebrate the unique and distinctly British creation that is cask ale, and draw more consumers into the category as well as further engage existing drinkers.

Sam Rhodes, Marketing Director, Asahi UK commented: “Cask ale remains a key focus for the teams at Fuller’s and Dark Star, our core brews from London Pride, ESB and Dark Star Hophead will all be prominent throughout the week and we also have a calendar of innovative seasonal brews to offer something new and exciting throughout various points of the year. Our Draught and Cask technical services are also available all year round to help operators provide the best experience possible for consumers, and to help keep them coming back to explore the category. Cask Ale forms an important part of our portfolio at Asahi UK and we will certainly be championing and celebrating it this Cask Ale Week.”

You can watch the trailer of the documentary here.

About the Craft Beer Channel

The Craft Beer Channel is a Youtube channel dedicated to great beer, people and breweries. Founded in 2013 by Jonny Garrett and Brad Evans, it has over 110,000 subscribers and around 7 million views to date, as well as awards from both the North American and British Guild of Beer Writers for its mini documentaries. As well as uploading videos every Wednesday they also publish a podcast, the Bubble, every Friday.

For more details or interviews email Jonny on craftbeerboys@gmail.com.