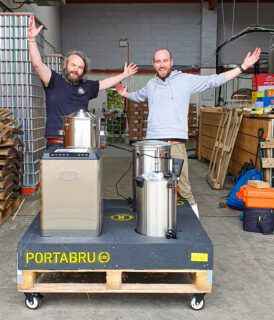 Today sees the release of the first Grainfather-sponsored video, in which the Craft Beer Channel builds the ultimate homebrew set-up – and then puts it on wheels!

The Craft Beer Channel have teamed up with Grainfather to produce a series of ambitious homebrewing videos that will involve collaborations with some of the world’s best craft breweries. In doing so they hope to help cement one of the biggest beer trends to come out of lockdown.

According to the UK’s biggest homebrew retailer Malt Miller, website orders increased by 50% last year as craft beer lovers switched from visiting taprooms and pubs to brewing their own during the COVID-19 pandemic.

Two of those beer geeks were Craft Beer Channel cofounders Jonny Garrett and Brad Evans, who installed their own cask ale handpull on Garrett’s coffee table and used a Grainfather G30 to brew their own version of Five Points Best bitter during the first summer lockdown. The resulting video series was watched over 80,000 times on Youtube, and inspired over 150 sales of the recipe kit from Malt Miller. Since then the channel has released four more homebrew series that have garnered over 150,000 views.

This week the Craft Beer Channel and Grainfather will take Youtube homebrew content to a new level as they announce the building of a state-of-the-art home brewery – or at least they intended to. Due to a delay in purchase of Garrett’s new house where the brewery was going to be built, the team had to think on their feet. With the equipment already on its way, they decided to build a mobile brewery that could go direct to the collaborating breweries.

The first episode is now live on the Craft Beer Channel Youtube page, and shows the build of the “PORTABRU” as well as the story behind the first collaboration beer with Walthamstow’s Wild Card Brewery. How good the Session Mountain IPA tastes will be revealed in next week’s episode, and from then there will be a new episode every month with some world-class breweries involved. The playlist will be released over the course of a year, culminating in the first ever commercial batch of Craft Beer Channel beer next summer.

Garrett says: “I’ve always enjoyed homebrewing, but during lockdown it became an obsession and one of the few silver linings of a really tough year. To team up with Grainfather, whose equipment I have been using for over five years is really exciting and I can’t wait to release some of the amazing collaborations we have put together.”

Sophie Blackmore from Grainfather says: “We’re really excited to be working with the guys at CBC and are proud to be supporting them on their brewing journey over the next 12 months. Covid hasn’t made it easy to kick off this new collaboration, but we’ve kitted the guys out with the ultimate brewery set-up and so everything should be smooth sailing from here on out. Bring on the laughs, adventures, and of course, great beers!”

Malt Miller will also be sponsoring the homebrew videos, providing expertise and ingredients for the brews, as well as recipe kits so viewers can try to recreate the beers at home.

Martin Rake of Malt Miller says: “Home Brewing had been on an upward trend before lock down and will hopefully continue on this. The growth in homebrewing is because people like to experience making things at home, they like to know what is in a product, the provenance and to be able to craft their own. The first CBC and Five Points colab video was a great success and such an awesome film as everyone could really relate to it.”

The Craft Beer Channel is Youtube’s biggest beer and homebrewing channel with over 107,000 subscribers and 6 million views to date. It was founded by Jonny Garrett and Brad Evans in 2013 and has won four British Guild of Beer Writer Awards and one North American Beer Writers Guild Award.

For more information contact Jonny and Brad at craftbeerboys@gmail.com