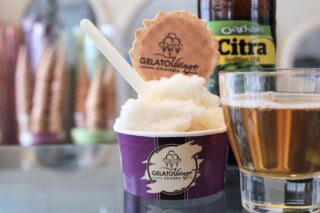 Forget beer and barbecue, it’s all about beer and gelato. Maestro Gelatiere Antonio De Vecchi carefully crafts his own recipe treats using the very best fresh seasonal ingredients, and they make a surprisingly good fit for the flavour profile of the iconic 4.6% session IPA, Citra.

“We were delighted to be asked to find a match for such a legendary beer,” Antonio said. “The zesty freshness of Citra complements so many of our British summer fruit offerings perfectly, especially raspberry and strawberry.”

“But the most refreshing pairing is with our PGI Amalfi Lemon sorbetto. We bring these world class lemons direct from the farmers of the beautiful Campanian coastline. The gelato we make with them creates a great synergy with the zingy citrus tones in the beer.”

Oakham Ales’ Head Brewer Mark Tetlow is a trained Beer Sommelier and has a favourite pairing of his own.

“I enjoyed a glass of Citra alongside Gelato Village’s San Biagio Pistacchio gelato. The gelato is so rich that it stops the hoppy bitterness of the beer from being accentuated by the sweetness of the dessert. And those indulgent nutty flavours really pull out the best of Citra’s tropical fruit and citrus tones.”

Is 2022 the year that the beer float makes a return? We’ll let you decide.

Multi award winning Oakham Ales are the established pioneers of UK brewing. Founded in 1993, they were one of the first UK breweries to bring back hops from the USA and the New World. Oakham were the first British brewery to create a beer using 100% Citra hops in 2010 and they were named the Good Pub Guide’s Brewery of the Year in 2019.

Since 2014, Gelato Village have made a name for themselves by using fresh Leicestershire milk and seasonal produce as the cornerstone of their delicious gelato, as well as offering a wide range of vegan friendly plant-based desserts. Often named the best gelateria in the UK, they offer a little taste of their Italian heritage by offering unusual delights like the Bicerin, a coffee drink that hails from their home city of Turin.