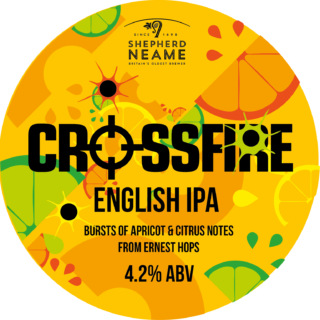 Shepherd Neame’s first Cask Club beer of 2020 will be Crossfire (4.2% ABV), an English IPA bursting with apricot and citrus notes.

Crossfire has been brewed using the Ernest hop, which is renowned for its heady hints of tropical fruit and New World characteristics. It is the first time that Shepherd Neame has used the distinctive Kentish hop, which is named after Professor Ernest Salmon who oversaw its initial cultivation back in the 1950s.

Shepherd Neame’s Senior Brewer Stewart Tricker said: “The Ernest hop was first discovered in the Kentish fields of the East Malling Research Station, later Wye Hops, in the early 1950s. It was not extensively developed due to the belief at the time that it had a strong American aroma.  Following the changing tastes in beer styles and flavour profiles in recent years, however, this hop is now a perfect choice for us to use. We are very excited to be creating a new beer with this historic hop.”

Crossfire will be available throughout February.

The programme for 2020 promises to be every bit as groundbreaking as last year. Future ales to look out for over the next few months include Why can’t we be Fronds (March), a botanical beer, Samuel Adams Blonde Ambition (April) and May Bee (May), a honey ale.