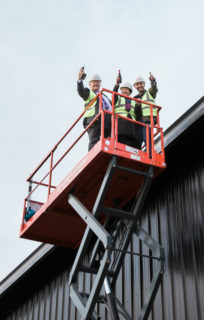 Curious Brewery held the topping-out ceremony for its new brewery in Ashford, celebrating the highest piece of the new steel structure being secured into place.

Curious Brewery is owned by Chapel Down Group, one of the UK’s most exciting drinks companies and the eponymous owner of Chapel Down wines, sparkling wines and spirits.

The topping-out ceremony included local press, local dignitaries including Gerry Clarkson, the Leader of Ashford Borough Council, Curious Brewery MD Gareth Bath, Chapel Down CEO Frazer Thompson and staff from across the businesses who all enjoyed a Curious Brew to mark the key milestone in the brewery’s building schedule.

Cllr Gerry Clarkson, Leader of Ashford Borough Council, said: “It’s always delightful when we see a vision come to fruition. To be here in the town centre – especially in this economic climate – says just how well Ashford is doing and I’m sure, with everything it has to offer, the Curious Brewery will be a great addition to the town.”

Ashford Borough Council’s Chief Executive Tracey Kerly added: “This is change, putting Ashford on the map from a different perspective. We’re so pleased that Chapel Down have decided to come here. It’s rare to have a brewery in a town centre, and we’ve not got a brewery and restaurant right in the heart of Ashford.”

Gareth Bath says, “The brewery is really beginning to take shape and we’ve been delighted with the progress we’ve made so far.  Our opening date towards the end of March is on-track and we’re making plans for the opening and beyond.

“The new Curious Brewery won’t just be a major new employer in Ashford, directly and indirectly creating dozens of new jobs, it will be a reason for thousands of new visitors to come to the town each year and become a significant new focal point for everyone who lives here.

“The Curious Brewery is, obviously, going to produce thousands of litres of premium English lager, but the bar, restaurant and gardens mean it’ll be so much more than ‘just’ a brewery, our doors will be open.”

The 1.6-acre site that includes the custom built 5-vessel brewhouse, will be capable of producing more than four-and-a-half million pints per year. Beer will be kegged and bottled on site at a rate of more than 4,000 bottles an hour.

The new brewery will take inspiration from the tourism experiences offered at the Chapel Down Winery. Curious’ Cicerone-trained team will host small group tours of the brewery facility that will tell the full field-to-throat story of their range of premium beers and ciders.

Curious guests will be taken on a journey through the production side of the brewery before sitting down for a tasting of the core range & any limited batch beers straight from the tanks, to ensure the freshest and best quality beer is enjoyed by all.

The brewery ground floor will consist of a 1,000sq foot shop, bar and hosting area for the tours. Spectacular landscaped kitchen gardens taking inspiration from the Kent coastline at Dungeness Headland and the raw hop and barley ingredients of Curious beers, alongside a waterfall feature cascading from the front of the brewery, will complete the ground floor.

The first floor will feature a premium 4,000sq foot bar and two dining rooms, where an open kitchen will serve modern British cuisine with ingredients sourced from local suppliers.

In the luxury private dining room, once a week, guests will have the opportunity to book onto special masterclasses hosted by one of the brewery-team and featuring a bespoke menu from the kitchen, each carefully paired with a beer from the Curious range to showcase the quality local ingredients.

And of course, as part of the Chapel Down Group, guests can expect a full range of premium wines, spirits and cocktails for those looking for an alternative to the joys of beer.

The Curious Brewery product range is listed nationally in Majestic, Waitrose and Tesco, as well as in many of the UK’s finest restaurants and bars.