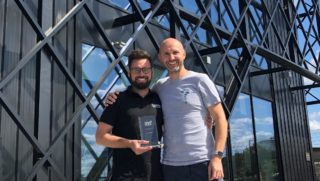 Curious Brewing has been hailed the ‘UK Brewer of the Year’ at the prestigious International Beer Challenge 2019.

The Kent-based brewer, owned by England’s leading wine producer Chapel Down, beat stiff competition to take home the award after being judged by a panel of 70 industry experts including brewers, journalists, retailers and flavour experts.

Gareth Bath, Managing Director Curious Brewing, said, “This is unbelievable and amazing for us. We are currently a small player in the UK beer market, but we’ve now been judged to be the best brewer in the entire country! We’re thrilled!

“We’ve always believed our unique winemaker’s approach creates delicious, premium brews, but it’s something else to win an internationally recognised award to validate it. This is huge for us and I couldn’t be prouder of the talented team that we’ve built and who have helped bring this home.

“The next step for our talented Head Brewer Matt Anderson and our brilliant team of master brewers will be to continue to refine our range and significantly widen our distribution across pubs, restaurants and retailers so more people can taste our wonderful beer.”

The award wins come on the back of what has been a momentous year for Curious Brewing. Not only did 2019 see the opening of its state-of-the art, multi-million pound ‘cathedral of brewing’ in the heart of Ashford, Kent, but this year will also see a complete rebranding of Curious Brewing’s core range of beer and cider, with new bottles launching this Autumn.

Highlights of this year’s awards received by Curious Brewing include:

Launched in 2011, Curious Brewing is a range of premium beers and cider produced using winemaking expertise. The range comprises:

Curious Brewing beers and cider are listed nationally in Majestic, Waitrose and Tesco, as well as in many of the UK’s finest restaurants and bars