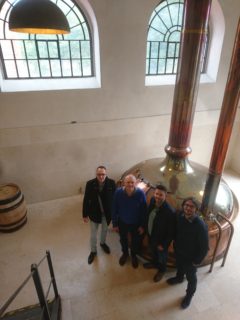 Specialist drinks importer Euroboozer has teamed up with CzechTrade and Czech Tourism to showcase the best of the country’s beer in 2019.

With an inaugural Czech Beer Week planned to take place in the UK from the 17th-23rd June around Czech Beer Day on the 19th June, Euroboozer will roll out the biggest selection of traditionally brewed Czech lagers and craft beers ever to arrive in the UK.

The multi-faceted campaign begins with an exclusive ‘Real Czech Lager Workshop’ at the Czech Embassy in May before a series of tastings, meet the brewer sessions, beer pairing nights, events and activations take place in bars, pubs and restaurants around the UK during Czech Beer Week.

Over 40 beers are set to be showcased for the first time in the UK including Kutna Hora, Cvikov, Kanec and Bohemia Regent beer brands. Full details of events for the week will be announced in May.

For on-trade operators interested in getting involved in Czech Beer Week, email enquiries@euroboozer.co.uk for details of the exciting offers and support packages.

“The Czech Republic is steeped in beer-making history and heritage and Czech beers are a symbol of quality around the world.  The Czech beer scene has really started to thrive since the early 1990s but most traditional Czech breweries date back to the medieval times with Bohemia Regent brewing without interruption as far back as 1379. We only get to see the big breweries over here, many of which are owned by ‘Big Breer’.

“Local breweries are now being brought back to life all over the country after years of being closed or run down by the government and international PLCs. They’re now thriving with many using tradition Czech Lager brewing techniques to make a huge array of excellent quality delicious Czech Pilsners. For this reason, we’re incredibly proud to be working alongside CzechTrade and Czech Tourism to launch the inaugural Czech Beer Week in the UK.  I believe most UK consumers have only just scratched the surface when it comes to the country and its beer so we have an exciting calendar of events to activate, educate and excite over the next six months.”

Martin Macourek, Director for the UK and Ireland at CzechTrade, said:

“It’s great to be working with Martyn and the team at Euroboozer to highlight and drive interest in the incredible array of brewers, breweries and brands we are blessed to have in the Czech Republic. We are proud to launch the Real Bohemian Lager category in the UK. Indeed, with the UK’s consumer continuing to search out quality beers from around the world, we’re confident the plan in place will ensure Czech beer continues to be a beacon of quality in the UK and around the world.”

Started from the back of an old VW Vento in 2003, Euroboozer was set up by beer lover Martyn Railton, initially importing Austrian brands Stiegl, Schremser and Hirter. The company soon branched out across the Atlantic to bring some of the finest US craft brewers to these shores. Fifteen years on the VW Vento has gone to be replaced with offices and a warehouse in Hertfordshire. Euroboozer now supplies some of the finest food and beverage establishments in the country and their brands are mainstays in almost all of the UKs top craft beer bars and bottle shops.

For further information, please contact the Euroboozer on 01923 263335 or visit www.euroboozer.co.uk