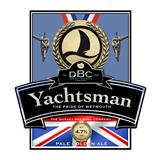 Dorset Brewing Company’s golden ale, Yachtsman, was a huge success at this year’s Tuckers Maltings Beer Festival held at Newton Abbott last week. A showcase for the West Country brewers, the festival competition gets harder every year with over 250 different real ales being judged.

Organised by SIBA South West Branch, and held at the unique venue of Tuckers Maltings, Yachtsman was awarded silver in the Premium Bitter class and DBC’s MD Giles Smeath was delighted with the success. “Being awarded a silver in the same year that Weymouth hosts the Olympic sailing and we enjoy the first year in our new premises with a new plant, this award couldn’t be timed better. The staff have worked extremely hard and it has been a great team effort. We relocated the brewery in January 2011 and this is a true recognition of all they’ve put in.”

Brewed to commemorate the 2012 Sailing Olympics in Weymouth, this is Yachtsman’s second award since its launch last year. Consequently, due to its immediate success and popularity throughout the South West, this 4.7% golden ale is now also available in bottle as well as cask.