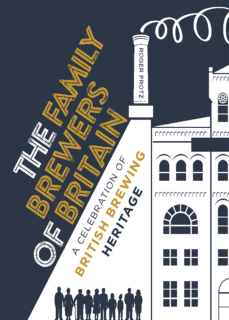 Award-winning beer writer Roger Protz charts 300 years of British brewing through the fascinating and sometimes fractious histories of the families still running them in his latest title, The Family Brewers of Britain.

Published by the Campaign for Real Ale and in association with the Independent Family Brewers of Britain (IFBB), this lavishly illustrated book examines the contribution made to British brewing by its family brewers from the earliest days of commercial brewing through the Industrial Revolution and Victorian innovations, to the advent of the craft beer revolution.

With in-depth features and interviews from 30 family brewers, Protz examines the past, present and future of these great brewing companies. Readers will uncover some intriguing family rows, discover the pioneering female brewers, and of course examine some of the biggest threats faced by these British institutions over the centuries.

Author Roger Protz is a campaigner, broadcaster, and author of dozens of books about beer and brewing. He regularly appears in the media and has edited 24 editions of CAMRA’s market-leading Good Beer Guide.

Protz says: “Our family brewers are often overlooked flag bearers for real ale and have fascinating stories to tell. Many have been around for hundreds of years, surviving wars, bomb damage, recession, threats of invasion, taxation and mergers and have come out the other side as the sturdy backbone of traditional beer in this country.

“Some of the brewers remain in buildings of great architectural importance with gleaming coppers and wooden fermenting vessels, and a few still deliver beer by horse-drawn drays and employ coopers to fashion casks made of oak. But they are not living in the past – they have faced the challenges of the modern beer-drinking world and still produce beers that meet the demands of today’s consumers.”

The Family Brewers of Britain goes on sale from CAMRA Books on 9 September retailing at £21.99. To find out more and order your copy, visit https://shop1.camra.org.uk/product/the-family-brewers-of-britain/

CAMRA, the Campaign for Real Ale, is a not-for-profit consumer group with over 192,000 members that has been operating since 1971. Our vision is to have quality real ale and thriving pubs in every community.